Alright, let’s review. A Borg Complex is exhibited by writers and pundits whenever you can sum up their message with the phrase: “Resistance is futile.”

The six previously identified symptoms of a Borg Complex are as follows:

2. Uses the term Luddite a-historically and as a casual slur

5. Starkly and matter-of-factly frames the case for assimilation

6. Announces the bleak future for those who refuse to assimilate

In an effort to further refine our diagnostic instruments, I am now adding two more related symptoms to the list. The first of these arises from a couple of cases submitted by Nick Carr and is summarized as follows:

7. Expresses contemptuous disregard for the achievements of the past

Consider this claim by Tim O’Reilly highlighted by Carr:

“I don’t really give a shit if literary novels go away. … the novel as we know it today is only a 200-year-old construct. And now we’re getting new forms of entertainment, new forms of popular culture.”

Well, there you have it. This same statement serves to illustrate the second symptom I’m introducing:

8. Refers to historical parallels only to dismiss present concerns.

This symptom identifies historical precedents as a way of saying, “Look, people worried about stuff like this before and they survived, so there’s nothing to be concerned about now.” It sees all concerns through the lens of Chicken Little. The sky never falls. I would suggest that the Boy Who Cried Wolf is the better parable. The wolf sometimes shows up.

2. Fatalistic commitment to technological determinism (in pessimistic and optimistic varieties)

Now let’s consider some more cases related to education, a field that is particularly susceptible to Borg Complex claims. In a recent column, Thomas Friedman gushed over MOOCs:

These are high, indeed utopian hopes, and in their support Friedman offered two heartwarming anecdotes of MOOC success. In doing so, he committed the error of tech-uptopians (modeled on what Pascal took to be the error of Stoicism): Believing the wonderful use to which a technology can be put, will be the use to which it is always put.

Friedman wrapped up his post with the words of M.I.T. president, L. Rafael Reif, “There is a new world unfolding and everyone will have to adapt.”

And there it is — Borg Complex.

In long piece in The Awl (via Nathan Jurgenson), Maria Bustillos discusses an online exchange on the subject of MOOCs between Aaron Bady and Clay Shirky. Take the time to read the whole thing if you’re curious/worried about MOOCs. But here is Shirky on the difference between he and Bady: “Aaron and I agree about most of the diagnosis; we disagree about the prognosis. He thinks these trends are reversible, and I don’t; Udacity could go away next year and the damage is already done.”

At this juncture it’s worth asking, as Jurgenson did in sending me this last case, “Is he wrong?”

Is it not the case that folks who exhibit a Borg Complex often turn out to be right? Isn’t it inevitable that their vision will play out regardless of what we say or do?

My initial response is … maybe. As I’ve said before, a Borg Complex diagnosis is neutral as to the eventual veracity of the claims. It is more about an attitude toward technology in the present that renders the claims, if they are realized, instances of self-fulfilling prophecy.

The appearance of inevitability is a trick played by our tendency to make a neat story out of the past. Historians know this better than most. What looks like inevitability to us is only a function of zooming so far out that all contingencies fade from view. But in the fine-grain texture of lived experience, we know that there are countless contingencies that impinge upon the unfolding of history. It is also a function of forgetfulness. If only we had a catalog of all that we were told was inevitable that didn’t finally transpire. We only remember successes and then we tell their story as if they had to succeed all along, and this lends claims of inevitability an undeserved plausibility.

One other consideration: It is always worth asking, Who stands to profit from tales of technological inevitability?

Consider the conclusion of a keynote address delivered at the Digital-Life-Design Conference in Munich by Max Levchin:

“So to conclude: I believe that in the next decades we will see huge number of inherently analog processes captured digitally. Opportunities to build businesses that process this data and improve lives will abound.”

The “analog processes” Levchin is talking about are basically the ordinary aspects of our human lives that have yet to be successfully turned into digital data points. Here’s Carr on the vision Levchin lays out:

“This is the nightmare world of Big Data, where the moment-by-moment behavior of human beings — analog resources — is tracked by sensors and engineered by central authorities to create optimal statistical outcomes. We might dismiss it as a warped science fiction fantasy if it weren’t also the utopian dream of the Max Levchins of the world. They have lots of money and they smell even more: ‘I believe that in the next decades we will see huge number of inherently analog processes captured digitally. Opportunities to build businesses that process this data and improve lives will abound.’ It’s the ultimate win-win: you get filthy rich by purifying the tribe.”

Commenting on the same address and on Carr’s critique, Alan Jacobs captures the Borg-ish nature of Levchin’s rhetoric:

“And Levchin makes his case for these exciting new developments in a very common way: ‘This is going to add a huge amount of new kinds of risks. But as a species, we simply must take these risks, to continue advancing, to use all available resources to their maximum.’ Levchin doesn’t really spell out what the risks are — though Nick Carr does — because he doesn’t want us to think about them. He just wants us to think about the absolutely unquestionable ‘must’ of using ‘all available resources to their maximum.’ That ‘advance’ in that direction might amount to ‘retreat’ in actual human flourishing does not cross his mind, because it cannot. Efficiency in the exploitation of ‘resources’ is his only canon.”

We “must” do this. It is inevitable but that this will happen. Resistance is futile.

Except that very often it isn’t. There are choices to be made. A figure no less identified with technological determinism than Marshall McLuhan reminded us: “There is absolutely no inevitability as long as there is a willingness to contemplate what is happening.” The handwaving rhetoric that I’ve called a Borg Complex is resolutely opposed to just such contemplation, and very often for the worst of motives. By naming it my hope is that it can be more readily identified, weighed, and rejected.

Elsewhere McLuhan said, “the only alternative is to understand everything that is going on, and then neutralize it as much as possible, turn off as many buttons as you can, and frustrate them as much as you can … Anything I talk about is almost certainly to be something I’m resolutely against, and it seems to me the best way of opposing it is to understand it, and then you know where to turn off the button.”

Understanding is a form of resistance. So remember, carry on with the work of intelligent, loving resistance where discernment and wisdom deem it necessary.

This is a third in series of Borg Complex posts, you can read previous installments here. 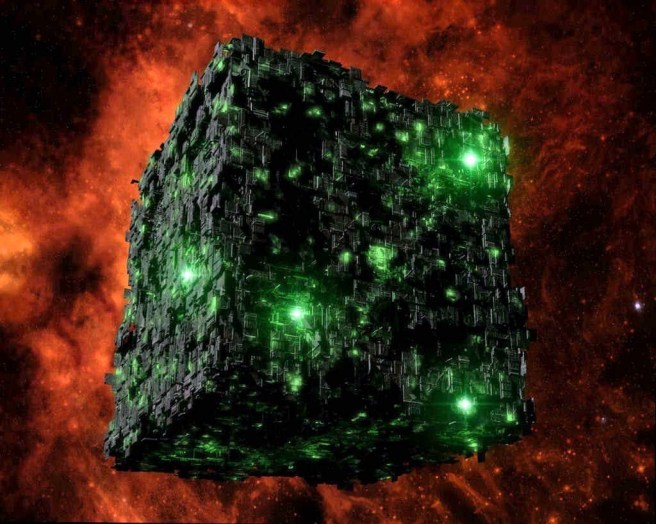