Last week a study suggesting that the ability to Google information is making it less likely that we commit information to memory garnered a decent amount of attention and discussion, including a few of my own thoughts in my last post.  In addition to writing a post on the topic I did something I almost never do for the sake of sanity, I followed the comment thread on a few websites that had posted articles on the story.  That was an instructive experience and has led to a few observations, comments, and questions which I’ll list briefly.

On that last note, consider Elizabeth Spires’ poem, “A Memory of the Future,” published in The Atlantic, and make of it what you will:

I will say tree, not pine tree.
I will say flower, not forsythia.
I will see birds, many birds,
flying in four directions.

I will revel in a world
no longer particular.
A world made vague,
as if by fog. But not fog.

Vaguely aware,
I will wander at will.
I will wade deeper
into wide water.

You’ll see me, there,
out by the horizon,
an old gray thing,
who finally knows

gray is the most beautiful color. 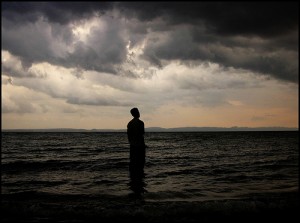 4 thoughts on “The Fog of Life: “Google,” Memory, and Thought”