In a recorded interview discussing the merits of Longfellow’s poetry, Dana Gioia, a fellow poet and former chairman of the NEA, made some arresting observations regarding the power of lyric poetry. He noted that great lyric poetry, of the sort Longfellow wrote, could weave “a spell of words around the auditor which goes right to the heart” — a reminder that the desire to “get” the meaning of a poem in other than poetic terms can be misguided.

Gioia then went on to tweak Franz Kafka’s metaphor — a book is the axe with which we break the frozen seas within us — for the purposes of understanding what poetry can do:

“A popular poem is this kind of … icepick that cracks this sort of … this composure we have around ourselves and affects us deeply and mysteriously in ways that we might not be able to articulate but that we can feel — our intuition recognizes as genuine.”

This resonated with me and I thought it worth passing along. Poetry, or the poetic imagination, as I have elsewhere suggested, can be a powerful supplement to the dispositions and habits seemingly engendered by technology (huge generalizations there, I know, but I’m going to have to let them lie). Read more poetry.

And while we are on poetry, here are two lines that have recently caught my attention, particularly in light of discussions of self-consciousness and authenticity. The first is from T. S. Eliot’s “The Love Song of Alfred Prufrock”:

And the second from Emily Dickinson, who elsewhere wrote, “Of Consciousness, her awful Mate The Soul cannot be rid”:

But since Myself — assault Me —
How have I peace
Except by subjugating
Consciousness?

And since We’re mutual Monarch
How this be
Except by Abdication —
Me — of Me?

Lastly, I’ll use this venture into the humanities to note the passing of the great scholar and critic, Jacques Barzun. He was 104. As Alan Jacobs tweeted this morning, it is striking to consider that Barzun could remember the First World War. I noted a passage from Barzun not that long ago.

Reading present day concerns into texts from earlier historical periods is a temptation that is often best resisted. It is, however, especially hard to resist while reading this opening paragraph of Percy Bysshe Shelley’s “Defense of Poetry” from 1821:

“We have more moral, political, and historical wisdom than we know how to reduce into practice; we have more scientific and economical knowledge than can be accommodated to the just distribution of the produce which it multiplies. The poetry in these systems of thought is concealed by the accumulation of facts and calculating processes. There is no want of knowledge respecting what is wisest and best in morals, government, and political economy, or at least, what is wiser and better than what men now practise and endure. But we let I dare not wait upon I would, like the poor cat in the adage. We want the creative faculty to imagine that which we know; we want the generous impulse to act that which we imagine; we want the poetry of life; our calculations have outrun conception; we have eaten more than we can digest. The cultivation of those sciences which have enlarged the limits of the empire of man over the external world, has, for want of the poetical faculty, proportionally circumscribed those of the internal world; and man, having enslaved the elements, remains himself a slave. To what but a cultivation of the mechanical arts in a degree disproportioned to the presence of the creative faculty, which is the basis of all knowledge, is to be attributed the abuse of all invention for abridging and combining labor, to the exasperation of the inequality of mankind? From what other cause has it arisen that the discoveries which should have lightened, have added a weight to the curse imposed on Adam? Poetry, and the principle of Self, of which money is the visible incarnation, are the God and Mammon of the world.”

Update: It occurs to me that there is an interesting parallel here to a line from TS Eliot that I like to throw around.

Came across the following this morning. Posted for your consideration.

The Vacation
by Wendell Berry

Once there was a man who filmed his vacation.
He went flying down the river in his boat
with his video camera to his eye, making
a moving picture of the moving river
upon which his sleek boat moved swiftly
toward the end of his vacation. He showed
his vacation to his camera, which pictured it,
preserving it forever: the river, the trees,
the sky, the light, the bow of his rushing boat
behind which he stood with his camera
preserving his vacation even as he was having it
so that after he had had it he would still
have it. It would be there. With a flick
of a switch, there it would be. But he
would not be in it. He would never be in it. 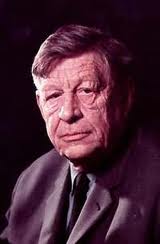 “The soul shrinks from all that it is about to remember.”

” … having taught hell’s fire a singing way to burn …”

These are just a few of the many delightful and haunting lines from the poetry of Richard Wilbur, a former national poet laureate and two-time Pulitzer Prize  winner who turned 91 last month.

Those of you who have been reading for a while will have gathered that W. H. Auden is a poet I hold in high esteem. In light of that, here is Richard Wilbur’s “For W. H. Auden” which first appeared in The Atlantic in 1979:

Now I am surer where they were going.
The brakie loping the tops of the moving freight,
The beautiful girls in their outboard, waving to someone
As the stern dug in and the wake pleated the water.

The uniformed children led by a nun
Through the terminal’s uproar, the clew-drawn scholar descending
The cast-iron stair of the stacks, shuffling his papers,
The Indians, two to a blanket, passing in darkness,

Also the German prisoner switching
His dusty neck as the truck backfired and started—
Of all these noted in stride and detained in memory
I now know better that they were going to die,

Since you, who sustained the civil tongue
In a scattering time, and were poet of all our cities,
Have for all your clever difference quietly left us,
As we might have known that you would, by that common door.

To begin with, the technological imagination very often fragments reality into its constituent parts.  The machine with its interchangeable components becomes a kind of master metaphor; the technological imagination sees parts where the poetic imagination takes in the whole.  Consider that poetry very often works through metaphor and metonymy which pushes us to see relationships.  With poetry we understand by bringing reality together rather than by dividing it up.

Along similar lines, James Gleick recently reminded that the key to the digital revolution came when mathematician Claude Shannon recognized that communication could be abstracted from concrete contexts, divorced from meaning, and efficiently transmitted as a series of binary decisions — yes/no, 1/0 — or, as he called them, bits.  Reduce to essentials, kill redundancy; abstract the message from the medium, the content from the form.  These were the principles of information theory and the foundations of the digital age.

Poetry suggests to us the limits of such an approach.  In his review of The Information, Nicholas Carr observed that, “What information theorists call redundancy … is also the stuff of poetry.”  We would have a very hard time abstracting the meaning of poetry from its form.  The assumption that one could do so is probably why so many have such a hard time “understanding” or “getting” poetry.  In a way, the desire to “understand” is misguided because it seeks a “meaning” apart from the form of the text.  It desires to reduce to themes stated in prose what the poem captures in its own unique form.  The meaning is in the reading, and in the reading out loud at that.  When Robert Frost was asked to tell what his poem was about in other words, Frost responded that if he could have done so, he wouldn’t have written the poem.  With poetry the form is the meaning; at least, it is inseparable from the meaning.

Describing her project in How We Became Posthuman — a book that touches on Shannon, cybernetics, and the onset of the information age — Katherine Hayles spoke of explaining “how information lost its body.”  This is a suggestive formulation.  Where digital technologies tend in some respects to push us toward a neglect of the body, poetry relies on embodiment for its meaning.  I emphasized reading out loud above because poetry conveys its meaning and does its work by the operation of the sounds it produces through our body.  Another problem with our “understanding” of poetry may then be that we seek its meaning in the silence of our minds.  We can “hear” something of the sounds in that silence, but not quite in the way that we would when our mouths are forming words and enacting the rhythms of the poem.

One last thought, in so far as poetry remains elusive, it also combats the sense of mastery encouraged by technology.  Technology can, as Heidegger warned, position the world at our service, ready to be manipulated in the worst sense.  Poetry refuses to thus accommodate us, it resists our efforts to “grasp” it and use it.  It provides resistance in a social world that is otherwise increasingly designed to be “frictionless.”  In this way, poetry is an antidote to the worst delusions we might become subject to in a world that, we are repeatedly told, is at our fingertips.

If I am at all on to something, then we can sum up by saying that the poetic imagination (which is to say the imagination nurtured by poetry) balances the technological imagination by seeking to hold the world together and by refusing the abstraction and alienation often engendered by a technological orientation to reality.

thinking to bring you news

and concerns many men.  Look at

what passes for the new.

You will not find it there but in

to get the news from poems

yet men die miserably every day

of what is found there.”