In December 2016, I observed, alluding to Tolkien’s Lord of the Rings, that Twitter was akin to Trump’s ring of power. Just as the One Ring in Tolkien’s fictional world had been devised to control all other rings of power, so Trump deployed Twitter to manipulate other media. With one tweet, Trump could own the news cycle. 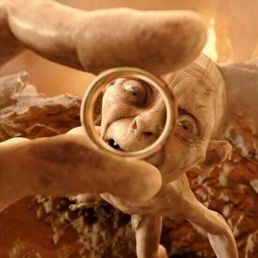 Here’s a brief elaboration of the analogy without reference to Trump.

In Tolkien’s world, the One Ring makes the wearer invisible to those around them but with a catch: it makes the wearer visible to the Sauron, the true master of the Ring, and corrupts the soul of the wearer. The power Twitter confers, on the other hand, is precisely the power to become visible, potentially to a great many people. The catch is that such visibility is ephemeral and distorting. It is gone in a flash and what it makes visible is often a reduction of the person distorted to fit the demands of the medium.

First point, then, starkly put: Use of Twitter, like wearing the ring, can disfigure and corrupt the soul of the user as it disfigured and corrupted Gollum.

As with the Ring of Power, it is often the case that the wisest among us, like Gandalf, refuse to bear it at all.

With Twitter as with the Ring, those like Boromir who are most naively intent on using its power for good are also those who are most likely to be corrupted by its power.

Yet it is also the case with the ring of power that some were called upon to bear it for a time, Bilbo and Frodo most notably.

It is true that Frodo took up the burden of bearing the ring only so that it might be destroyed. While destroying Twitter in the fires of Mount Doom is not in the cards, it is not impossible to imagine using Twitter in a way that countermands its dominant tendencies. At the council of Elrond, it was made clear that, if the Hobbits succeed, it will be because they are working against the logic of the ring and its maker, refusing its power rather than seeking maximize it.

But … Bilbo and Frodo are not left unchanged by the ring. Humbly noble as they may have been, they were not beyond its corrupting influence. So it is with Twitter: there will be very few who are so virtuous, indeed so holy, as to take it up and be left unchanged. About this we should be clear-eyed.

An expanded version of these observations will appear on the Front Porch Republic sometime next week as part of an ongoing discussion about Twitter, social media, Wendell Berry, and localism. The initial post in that discussion is here.