Okay, not “all,” but here is an image that captures much of what is wrong in the world of education. 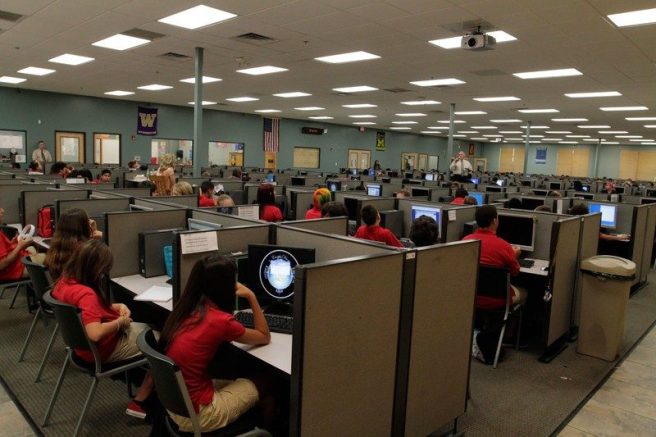 You can read more about this school, called (without irony we are to assume) Carpe Diem, here.

When I first saw the image, I wondered, for a fleeting moment, if this were a parody or a fictional school set in some dreary, soul-numbing dystopian future. No such luck. Thinking beyond my initial visceral response, one question came to mind: What do you have to believe about the human person, knowledge, and education to think that this is a good model for how children should learn?

That question was followed by another, more cynical query: What business model do you have to buy into?

But let’s return to the first question for a moment. In numerous contexts, the philosopher James K.A. Smith has observed that every pedagogy assumes an anthropology. That is to say that every theory and practice of education assumes a certain view of the human person. Needless to say, this view is not always explicit, nor can it always be articulated by those who take it for granted. Nonetheless, when someone sets out to educate children they do so based on some understanding of what it means to flourish as a human being, the goal of education, what counts as knowledge, and how children learn.

So, again, what do you have to believe in order to conclude that this cubicle based model of education is the way to go? At the very least, I’d say that you’d have to discount both the embodied and social dimensions of learning. Hook your brain up to the screen, forget you have a body or that the body has much to do with how we come to learn about the world, and download the data. Never mind interpersonal relationships that fuel the desire to learn, never mind models and mentors, never mind the knowledge that can only be gained in conversation with peers and teachers.

You would also have to assume that education was merely a matter of transferring discreet bits of information from one receptacle, the computer, to another, the human mind. In other words, you would have to assume an impoverished account of both what it is to be a human being and of knowledge itself.

In fact, though, a similar trajectory was already discernible much earlier when “the machine” became our master metaphor. Consider this French cartoon from the late nineteenth century. 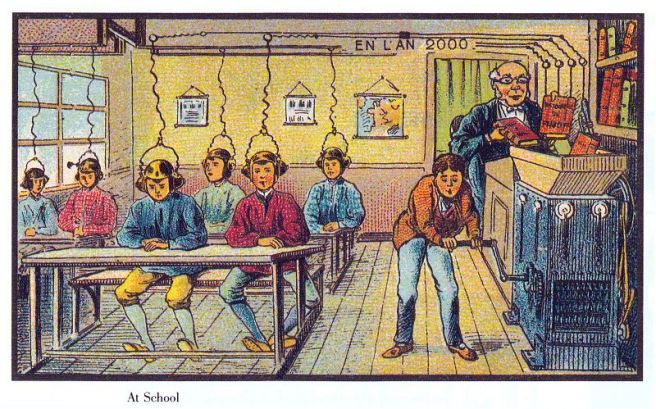 I’d suggest the image above finds its fulfillment in the image of the Carpe Diem school with which we began.

A few years ago, I touched on related matters from another angle. I wrote then of a similar “unspoken assumption” about learning: “that knowledge is merely aggregated data and its mode of acquisition does nothing to alter its status. But what if this were a rather blinkered view of knowledge? And what if the acquisition of knowledge, however understood, was itself only a means to other more important ends?

If the work of learning is ultimately subordinate to becoming a certain kind of person, then it matters very much how we go about learning. In some sense, it may matter more than what we learn. This is because  the manner in which we go about acquiring knowledge constitutes a kind of practice that over the long haul shapes our character and disposition in non-trivial ways. Acquiring knowledge through apprenticeship, for example, shapes people in a certain way, acquiring knowledge through extensive print reading in another, and through web based learning in still another. The practice which constitutes our learning, if we are to learn by it, will instill certain habits, virtues, and, potentially, vices — it will shape the kind of person we are becoming.”

If this is the case, then what sort of formation is taking place given the practice of learning embodied by the Carpe Diem school?

Let me reiterate, though: the Carpe Diem model is just a more extreme example of practices and assumptions that are widely distributed throughout the world of education, where, regrettably, the siren song of the next revolutionary educational technology often proves too hard to resist no matter how many times it has shipwrecked those who heed it. 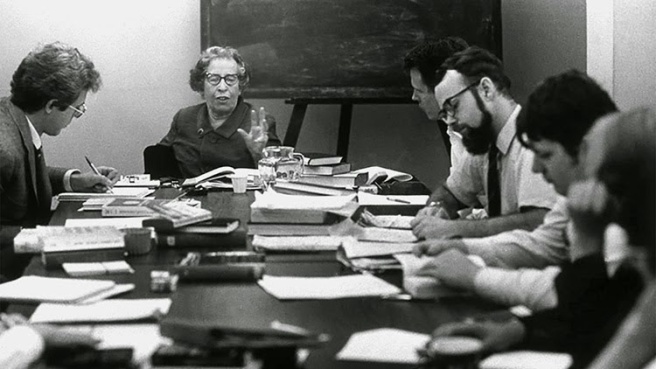 Yes, I know we can’t all sit around the seminar table with the likes of Hannah Arendt. Nonetheless, in my view, there is an ideal to strive for here.