Before I say anything else, let me say this: I get where this is coming from, really, I do. 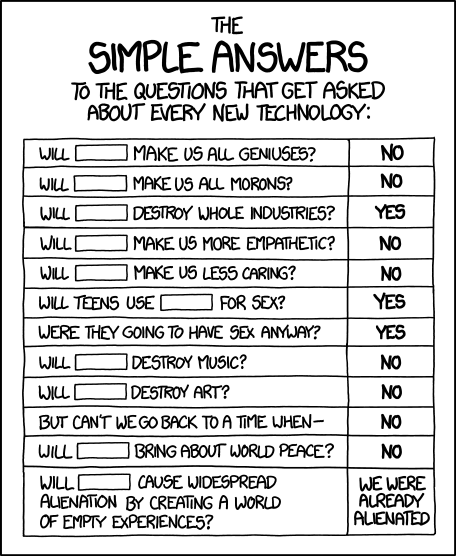 This is a recent xkcd comic that you may have seen in the past day or two. It makes a valid point, sort of. The point that I’d say is worth taking from this comic is this:  both unbridled enthusiasm and apocalyptic fear of any new technology are probably misguided. Some people need to hear that.

That said, this comic is similar in spirt to an earlier xkcd offering that Alan Jacobs rightfully picked apart with some searching questions. Although it is more pronounced in the earlier piece, both exhibit a certain cavalier “nothing-to-see-here-let’s-move-it-along” attitude with regards to technological change. In fact, one might be tempted to conclude that according to the xkcd philosophy of technology, technology changes nothing at all. Or, worse yet, that with technology it is always  que sera, sera  and we do well to stop worrying and enjoy the ride wherever it may lead.

In truth, I might’ve let the whole thing go without comment were it not for that last entry on the chart. It’s a variation of a recurring, usually vacuous rhetorical move that latches on to any form of continuity in order to dismiss concerns, criticism, etc. Since we have always already been X, this new form of X is inconsequential. It is as if reality were an undifferentiated, uncaused monistic affair in which the consequences of every apparent change are always contained and neutralized by its antecedents. But, of course, the fact that human beings have always died does not suggest to anyone in their right mind that we should never investigate the causes of particular deaths so as to prevent them when it is reasonable and possible to do so.

Similarly, pointing out that human beings have always used technology is perhaps the least interesting observation one could make about the relationship between human beings and any given technology. Continuity of this sort is the ground against which figures of discontinuity appear, and it is the figures that are of interest. Alienation may be a fact of life (or maybe that is simply the story that moderns tell themselves  to bear it), but it has been so to greater and lesser extents and for a host of different reasons. Pointing out that we have always been alienated is, consequently, the least interesting and the least helpful thing one could say about the matter.

If you’ve appreciated what you’ve read, consider supporting the writer.

14 thoughts on “On the xkcd Philosophy of Technology, Briefly”