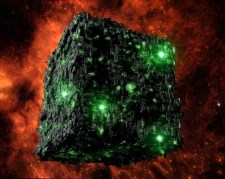 It’s been a while since I’ve had occasion to point out a Borg Complex case, but the folks at Google have seen fit to help me remedy that situation.

At MIT’s EmTech conference last Thursday, the head of the display division at Google-X, Mary Lou Jepsen, gave us a few gems.

Speaking of Google Glass and its successors, Jepsen explained, “It’s basically a way of amplifying you. I’ve thought for many years that a laptop is an extension of my mind. Why not have it closer to my mind, and on me all the time?”

In any case, her division is hard at work. They are “maybe sleeping three hours a night to bring the technology forward.”

“It’s coming,” she added. “I don’t think it’s stoppable.” Then why, I ask, lose so much sleep over it. One really ought not wear oneself ragged over something that’s bound to come to pass inevitably.

But, as per Mr. Brin’s directives, she wasn’t saying much about what exactly was coming. Whatever the next iteration of wearable computing looks like, Jepsen tells us “you become addicted to the speed of it, and it lets you do more fast and easily.”

Concerns? Never you mind. Remember Mr. Schmidts’s comforting assurances: “Our goal is to make the world better. We’ll take the criticism along the way, but criticisms are inevitably from people who are afraid of change or who have not figured out that there will be an adaptation of society to it.”

Silly fearful critics. Don’t they know resistance is futile, society will be assimi … er … will adapt.