I’ve not been able to track down the source, but somewhere Marshall McLuhan wrote, “Publication is a self-invasion of privacy. The more the data banks record about each one of us, the less we exist.”

The unfolding NSA scandal has brought privacy front and center. A great deal is being written right now about the ideal of privacy, the threats facing it from government activities, and how it might best be defended. Conor Friedersdorf, for instance, worries that our government has built “all the infrastructure a tyrant would need.” At this juncture, the concerns seem to me neither exaggerated nor conspiratorial.

Interestingly, there also seems to be a current of opinion that fails to see what all the fuss is about. Part of this current stems from the idea that if you’ve got nothing to hide, there’s nothing to worry about. There’s an excerpt from Daniel J. Solove’s 2011 book on just this line of reasoning in the Chronicle of Higher Ed that is worth reading (link via Alan Jacobs).

Others are simply willing to trade privacy for security. In a short suggestive post on creative ambiguity with regards to privacy and government surveillance, Tyler Cowen concedes, “People may even be fine with that level of spying, if they think it means fewer successful terror attacks.”  “But,” he immediately adds, “if they acquiesce to the previous level of spying too openly, the level of spying on them will get worse.  Which they do not want.”

I wonder whether we are not witnessing the long foretold end of western modernity’s ideal of privacy. That sort of claim always comes off as a bit hyperbolic, but it’s not altogether misguided. If we grant that the notion of individual privacy as we’ve known it is not a naturally given value but rather a historically situated concept, then it’s worth considering both what factors gave rise to the concept and how changing sociological conditions might undermine its plausibility.

Media ecologists have been addressing these questions for quite awhile. They’ve argued that privacy, as we understand (understood?) it, emerged as a consequence of the kind of reading facilitated by print. Privacy, in their view, is the concern of a certain type of individual consciousness that arises as a by-product of the interiority fostered by reading. Print, in these accounts, is sometimes credited with an unwieldy set of effects which include the emergence of Protestantism, modern democracy, the Enlightenment, and the modern idea of the individual. That print literacy is the sole cause of these developments is almost certainly not the case; that it is implicated in each is almost certainly true.

This was the view, for example, advanced by Walter Ong in Orality and Literacy. “[W]riting makes possible increasingly articulate introspectivity,” Ong explains, “opening the psyche as never before not only to the external objective world quite distinct from itself but also to the interior self against whom the objective world is set.” Further on he wrote,

Print was also a major factor in the development of the sense of personal privacy that marks modern society. It produced books smaller and more portable than those common in a manuscript culture, setting the stage psychologically for solo reading in a quiet corner, and eventually for completely silent reading. In manuscript culture and hence in early print culture, reading had tended to be a social activity, one person reading to others in a group. As Steiner … has suggested, private reading demands a home spacious enough to provide for individual isolation and quiet.

This last point draws architecture into the discussion as Aaron Bady noted in his 2011 essay for MIT Review, “World Without Walls”:

Brandeis and Warren were concerned with the kind of privacy that could be afforded by walls: even where no actual walls protected activities from being seen or heard, the idea of walls informed the legal concept of a reasonable expectation of privacy. It still does … But contemporary threats to privacy increasingly come from a kind of information flow for which the paradigm of walls is not merely insufficient but beside the point.

This argument was also made by Marshall McLuhan who, like his student Ong, linked it to the “coming of the book.” For his part, Ong concluded “print encouraged human beings to think of their own interior conscious and unconscious resources as more and more thing-like, impersonal and religiously neutral. Print encouraged the mind to sense that its possessions were held in some sort of inert mental space.” Presumably, then, the accompanying assumption is that this thing-like inert mental space is something to be guarded and shielded from intrusion. 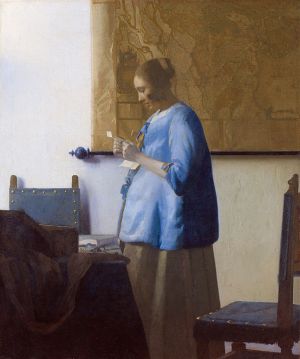 While it is a letter, not a book that she reads, Vermeer’s Woman in Blue has always seemed to me a fitting visual illustration of this media ecological perspective on the idea of privacy. The question all of this begs is obvious: What does the decline of the age of print entail for the idea of privacy? What happens when we enter what McLuhan called the “electric age” and Ong called the age of “secondary orality,” or what we might now call the “digital age”?

McLuhan and Ong seemed to think that the notion of privacy would be radically reconfigured, if not abandoned altogether. One could easily read the rise of social media as further evidence in defense of their conclusion. The public/private divide has been endlessly blurred. Sharing and disclosure is expected. So much so that those who do not acquiesce to the regime of voluntary and pervasive self-disclosure raise suspicions and may be judged sociopathic.

Perhaps, then, privacy is a habit of thought we may have fallen out of. This possibility was explored in an extreme fashion by Josh Harris, the dot-com era Internet pioneer who subjected himself, and willing others, to unblinking surveillance. The experiment in prophetic sociology was documented by director Ondi Timoner in the film We Live in Public.

The film is offered as a cautionary tale. Harris suffered an emotional and mental breakdown as a consequences of his experimental life. On the film’s website, Timoner added this about Harris’ girlfriend who had enthusiastically signed up for the project:  “She just couldn’t be intimate in public. And I think that’s one of the important lessons in life; the Internet, as wonderful as it is, is not an intimate medium. It’s just not. If you want to keep something intimate and if you want to keep something sacred, you probably shouldn’t post it.”

This caught my attention because it introduced the idea of intimacy rather than, or in addition to, that of privacy. As Solove argued in the piece mentioned above, we eliminate the rich complexity of all that is gathered under the idea of privacy when we reduce it to secrecy or the ability to conceal socially marginalized behaviors. Privacy, as Timoner suggests, can also be understood as the pre-condition of intimacy, and, just to be clear, this should be understood as more than mere sexual intimacy.

The reduction of intimacy to sexuality recalls the popular mis-reading of the Fall narrative in the Hebrew Bible. The description of the Edenic paradise concludes – unexpectedly until familiarity has taught you to expect it – with the narrator’s passing observation that the primordial pair where naked and unashamed. A comment on sexual innocence, perhaps, but much more I think. It spoke to a radical and fearless transparency born of pure guilelessness. The innocence was total and so, then, was the openness and intimacy.

Of course, the point of the story is to set up the next tragic scene in which innocence is lost and the immediate instinct is to cover their nakedness. Total transparency is now experienced as total vulnerability, and this is the world in which we live. Intimacy of every kind is no longer a given. It must emerge alongside hard-earned trust, heroic acts of forgiveness, and self-sacrificing love. And perhaps with this realization we run up against the challenge of our digital self-publicity and the risks posed by perpetual surveillance. The space for a full-fledged flourishing of the human person is being both surrendered and withdrawn. The voluntarily and involuntarily public self, is a self that operates under conditions which undermine the possibility of its own well-being.

But, this is also why I believe Bady is on to something when he writes, “Privacy has a surprising resilience: always being killed, it never quite dies.” It is why I’m not convinced that we could entirely reduce all that is entailed in the notion of privacy to a function of print literacy. If something that answers to the name of privacy is a condition of our human flourishing in our decidedly un-Edenic condition, then one hopes we will not relinquish it entirely to either the imperatives of digital culture or the machinations of the state. It is, admittedly, a tempered hope.