What follows are a series of underdeveloped thoughts for your consideration:

Advances in robotics, AI, and automation promise to liberate human beings from labor.

The Programmable World promises to liberate us from mundane, routine, everyday tasks.

Big Data and algorithms promise to liberate us from the imperatives of understanding and deliberation.

Google promises to liberate us from the need to learn things, drive cars, or even become conscious of what we need before it is provided for us.

But what are we being liberated for? What is the end which this freedom will enable us to pursue?

What sort of person do these technologies invite us to become?

Or, if we maximized their affordances, what sort of engagement with the world would they facilitate?

In the late 1950s, Hannah Arendt worried that automated technology was closing in on the elusive promise of a world without labor at a point in history when human beings could understand themselves only as laborers. She knew that in earlier epochs the desire to transcend labor was animated by a political, philosophical, or theological anthropology that assumed there was a teleology inherent in human nature — the contemplation of the true, the good, and the beautiful or of the beatific vision of God.

But she also knew that no such teleology now animates Western culture. In fact, a case could be made that Western culture now assumes that such a teleology does not and could not exist. Unless, that is, we made it for ourselves. This is where transhumanism, extropianism, and singularity come in. If there is no teleology inherent to human nature, then the transcendence of human nature becomes the default teleology.

This quasi-religious pursuit has deep historical roots, but the logic of technological innovation may make the ideology more plausible.

Around this time last year, Nick Carr proposed that technological innovation tracks neatly with Maslow’s hierarchy of human needs (see Carr’s chart below). I found this a rather compelling and elegant thesis. But, what if innovation is finally determined by something other than strictly human needs? What if beyond self-actualization, there lay the realm of self-transcendence?

After all, when, as an article of faith, we must innovate, and no normative account of human nature serves to constrain innovation, then we arrive at a point where we ourselves will be the final field for innovation.

The technologies listed above, while not directly implicated in the transhumanist project (excepting perhaps dreams of a Google implant), tend in the same direction to the degree that they render human action in the world obsolete. The liberation they implicitly offer, in other words, is a liberation from fundamental aspects of what it has meant to be a human being. 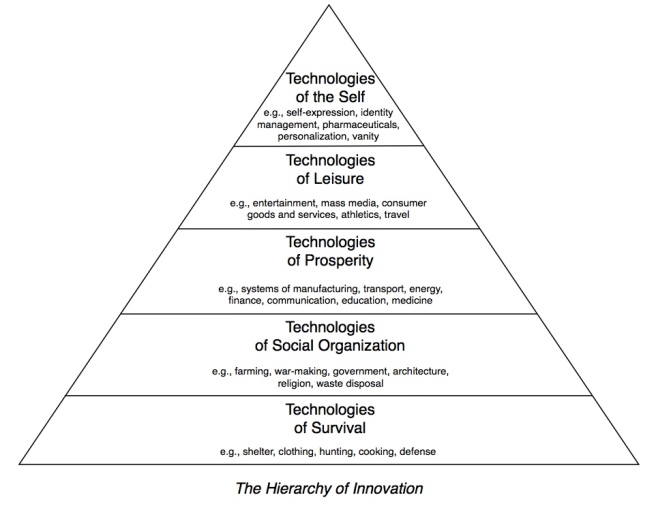 8 thoughts on “The Transhumanist Logic of Technological Innovation”