Late last month, I ran across a set of images created by Jo Teeuwisse superimposing scenes from World War II over images of those same places today. The effect has been universally described as haunting, and rightly so. The images also present a rather interesting form of augmented reality. If you’ve hung around this blog for awhile, you may have noticed that memory and place are two recurring themes. Naturally, these images caught my attention. Unfortunately, time constraints being what they are, I never did get around to writing about them.

Fortunately, Miranda Ward has. At Cyborgology, she has written a characteristically intelligent and well-crafted meditation on the images, “On Technology, Memory and Place.” She concludes on this note:

“So technology can do much to harness the power of place – to make memory increasingly social, to represent “the shared experience of bodies co-located in space” – and I think it should: I think this is part of the joy of it. But perhaps we also need to think about preserving the utterly private relationship with place – and what this preservation will look like in a “geo-optimized” world.” 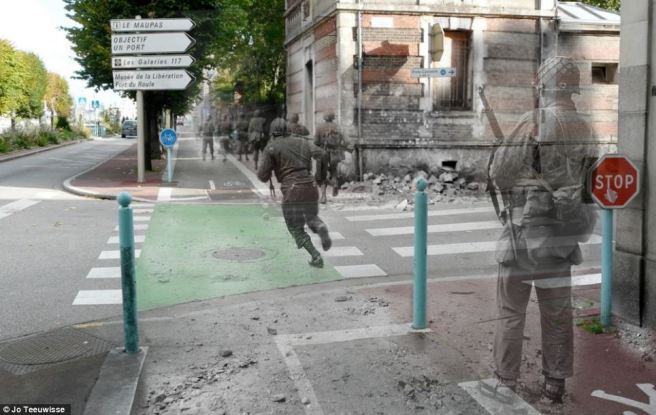 While reading Ward’s piece, and since first seeing these images, a few related items came to mind.

Back in February, Jason Farman wrote a piece in The Atlantic that reflected on how mobile technology altered our experience of places. Farman discussed one app by the Museum of London that allowed users to see images from London’s past superimposed over the present scene in much the same manner as Teeuwisse’s photographs. Farman was optimistic about what mobile devices can do for our experience of places:

“While none of these practices may seem unique to our digital age – stories have been attached to place throughout history – the ability to connect innumerable narratives to a single site is something that other media haven’t been able to effectively accomplish.”

At the time, I wrote a post in response which leaned a good deal on Michel de Certeau’s reflections on walking the city (it’s a passage I’ve come back to again and again). De Certeau’s writing on this theme is especially pertinent to the photographs that inspired Ward’s essay. In fact, these photographs and the Museum of London app discussed by Farman might be seen as tools to materialize the invisible realities evocatively identified by de Certeau.

Here’s how I then summarized de Certeau on haunted places:

Places have a way of absorbing and bearing memories that they then relinquish, bidden or unbidden. The context of walking and moving about spaces leads de Certeau to describe memory as “a sort of anti-museum:  it is not localizable.”  Where museums gather pieces and artifacts in one location, our memories have dispersed themselves across the landscape, they colonize.  Here a memory by that tree, there a  memory in that house.  De Certeau develops a notion of a veiled remembered reality that lies beneath the visible experience of space.

Places are made up of “moving layers.”  We point, de Certeau says, here and there and say things like, “Here, there used to be a bakery” or “That’s where old lady Dupuis used to live.”  We point to a present place only to evoke an absent reality:  “the places people live in are like the presences of diverse absences.”  Only part of what we point to is there physically; but we’re pointing as well to the invisible, to what can’t be seen by anyone else, which begins to hint at a certain loneliness that attends to memory.

Reality is already augmented.  It is freighted with our memories, it comes alive with distant echoes and fleeting images.

Digitally augmented reality functions analogously to what we might call the mentally augmented reality  that de Certeau invokes. Digital augmentation also reminds us that places are haunted by memories of what happened there, sometimes to very few, but often to countless many. The digital tools Farman describes bring to light the hauntedness of places. They unveil the ghosts that linger by this place and that.

This remains, as evidenced in Ward’s post, a very useful metaphor by which to think about technologies that allow us to conjure the ghosts of the past. As to the question that Ward comes back to on more than one occasion — So what? — I’m not entirely sure. In response to Farman’s essay, I offered up this alternative de Certeau-ian perspective:

Perhaps I am guilty, as Farman puts it, of “fetishizing certain ways of gaining depth.” But I am taken by  de Certeau’s conception of walking as a kind of enunciation that artfully actualizes a multitude of possibilities in much the same way that the act of speaking actualizes the countless possibilities latent in language. Like speaking, then, walking, that is inhabiting a space is a language with its own rhetoric. Like rhetoric proper, the art of being in a place depends upon an acute attentiveness to opportunities offered by the space and a deft, improvised actualization of those possibilities. It is this art of being in a place that constitutes a meaningful and memorable augmentation of reality.

What strikes me now about this conclusion is that it distinguished between an embodied interaction with a place and a strictly mental/visual interaction. These need not be mutually exclusive, of course. But perhaps it is worth noting that by there nature, apps and photographs that bring the past into the present forefront the visual, and the visual is only one way of knowing a place.

While I have been writing this, I have had next to this tab another with the text of W.H. Auden’s “Musée Des Beaux Arts.” This has been coincidental, but now it strikes me as serendipitous. The poem  goes like this:

About suffering they were never wrong,
The Old Masters: how well they understood
Its human position; how it takes place
While someone else is eating or opening a window or
just walking dully along;
How, when the aged are reverently, passionately waiting
For the miraculous birth, there always must be
Children who did not specially want it to happen, skating
On a pond at the edge of the wood:
They never forgot
That even the dreadful martyrdom must run its course
Anyhow in a corner, some untidy spot
Where the dogs go on with their doggy life and the
torturer’s horse
Scratches its innocent behind on a tree.

In Brueghel’s Icarus, for instance: how everything
turns away
Quite leisurely from the disaster; the ploughman may
have heard the splash, the forsaken cry,
But for him it was not an important failure; the sun shone
As it had to on the white legs disappearing into the green
Water; and the expensive delicate ship that must have seen
Something amazing, a boy falling out of the sky,
Had somewhere to get to and sailed calmly on.

With this poem, Auden reflected (via Bruegel’s painting, “Landscape with the Fall of Icarus”) on how suffering often unfolded unnoticed, unremarked upon, and, we might now add, unremembered. The photographs with which we began have the effect of inverting this dynamic. Now we, the living, take note. We can see what then may have passed while someone was dully walking along. It is now we who are the unnoticed ones. The past is there present before our eyes and we can see it, but it is silent with respect to us. It now walks dully on as we make our way, looking, perhaps, to anchor our ephemeral present in its weightiness. But alas they are just ghosts, and the anchor does not hold.

5 thoughts on “Conjuring Ghosts: Digital Technology and the Past”