Psychological warfare has been around for a long time. Alexander the Great reportedly ordered his armorers to fashion breastplates that would fit men eight to ten feet tall. He then left these behind where opposing forces would stumble upon them and be led to believe they were facing an army of giants.

During the age of print, leaflets were a favorite means of psychological warfare. During the Franco-Prussian War, they were dropped by French balloons over Prussian soldiers with the following message:

“Paris defies the enemy. The whole of France rallies. Death to the invaders. Foolish people, shall we always throttle one another for the pleasure and proudness of Kings? Glory and conquest are crimes; defeat brings hate and desire for vengeance. Only one war is just and holy; that of independence.”

“We, the Allied heavy bombers, do not cause you any immediate harm.We leave that to the strafing machineguns of our fighters.  We fly into Germany 30,000 feet above your head.  Your foxholes are not our targets.We aim for the factories which produce your ammunition, the railroads which carry your supplies, and the bridges which connect you with your home…We force you to fight with your back against a paralyzed Rhineland.Think of the destruction, every time we four-engined bombers come over.And we will be back soon.  You’ll be hearing from us.”

The Japanese also used leaflets to similar effect. The image below is of a Japanese leaflet dropped over British forces in Malaysia. 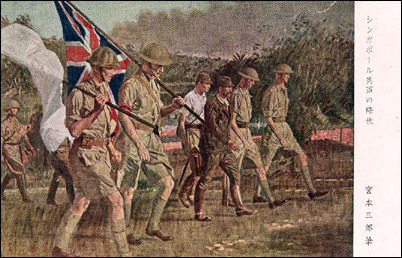 The text accompanying the image read:

“The fall of Singapore – The East Asian fortress under the intrusion of the British for more than a century – fell on Showa 15th year, the 2nd month, on the 17th day at 6:40 p.m. In a single file, bearing white flags, the British officers of the Malayan Command approached our mighty army to surrender. From the right: Commanding Officer Malaya, Lieutenant General Percival; Chief of the General Staff, Brigadier General Torrance; Staff officer, Colonel Sugita; Interpreter, Ling-zhuan; Chief Administrator of the British High Command, Malaya, Major General Newbiggen, who is holding the Union Jack; and Captain Wylde who serves as interpreter.”

Similar leaflets continue to be in use.

Aircraft equipped with loud speakers have also been used in the service of psychological warfare. During the course of their Indochinese wars, French planes broadcast the following to the Vietminh:

“Compatriots! You have planted a tree! The time has come for you to pick the fruit. V.M. wants to take this fruit away from you.”

“Working people, today the Air Force, tomorrow the guns, the machine-guns, the mortars and the mines. Leave your jobs and go back home!”

To this history, the regime of Syrian President Bashar Assad now adds a new entry: the text message. Targeting Syrian rebels, the regime sent a mass text message to cell phones throughout the country with the message: “Game over.”

They appear to have embraced the limits of the medium and perhaps something of the video game ethos as well. Sadly, for the thousands who have lost their lives and the thousands more who have been displaced, the Syrian uprising has hardly been a game.