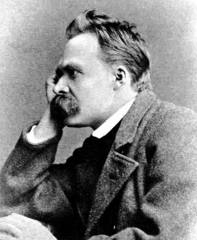 So I thought this was interesting. In a discussion of the New New Atheists (no, that wasn’t a typo) in Harper’s, Christopher Beha cites Alex Rosenberg, a philosopher at Duke, who “insists that doing away with religion means doing away with most of what comes with it: a sense of order in the universe, the hope that life has some inherent meaning, even the belief in free will.”

Now, is it just me or wasn’t that kind of Nietzsche’s whole point some hundred and twenty or so years ago? So at least one of the New New Atheists is actually just like the Old Atheists. In any case, I appreciate the consistency.

Of course, this is a gloomy picture and Rosenberg acknowledges that it can create a certain angst in some:  “There is . . . in us all the hankering for a satisfactory narrative to make ‘life, the universe and everything’ (in Douglas Adams’s words) hang together in a meaningful way. When people disbelieve in God and see no alternative, they often find themselves wishing they could believe, since now they have an itch and no way to scratch it.”

So Beha asks Rosenberg what can be done about this. Response:

“Rosenberg’s answer in his book is basically to ignore it. The modern world offers lots of help in this effort. To begin with, there are pharmaceuticals; Rosenberg strongly encourages those depressed by the emptiness of the Godless world to avail themselves of mood-altering drugs. Then there are the pleasures of acquisitive consumer culture—the making of money and the getting of things.”

Well, at least this is honest — and oddly Pascalian in an inverted sort of way.