What does it mean to be a tourist?

I thought about this often while spending two weeks out of the country being just that, a tourist. Sitting in front of one more cathedral, I think it was, having assaulted the structure with my camera and waiting to move on to the next target, I wondered whether someone had written something like a philosophy of tourism. I was certain someone must have; Alain de Botton surely. Every book I’ve ever imagined turned out already to have been written, often numerous times over.  I was sure this one was no exception. In any case, I didn’t plan to write that book. It was only a question occasioned by the nagging feeling that there was something fundamentally disordered about the experience we call tourism.

We know, of course, that there are many kinds of tourists ranging from the obnoxiously oblivious who seem to gleefully embrace the worst elements of the stereotype, to the ironically self-conscious who take pains to avoid appearing as a tourist at all. Most of us, as tourists that is, probably fall somewhere in between. For my part, I had little interest in pretending to be other than I was. And I certainly was not going to stop taking pictures in order to avoid appearing as a tourist.

In fact, I suffer from a severe case of camera eye. I would not claim to be an amateur photographer, as that might imply too high a level of photographic savvy, but I do enjoy taking pictures — many, many pictures. My wife tells me that she knows before I pull out the camera that I am about to do so because I get a certain look on my face that says, “That’s a good shot I’ve got to have.” I have no doubt that this is the case. I’ve frequently used the experience of walking around with a digital camera as an illustration of the way a technology can alter our experience merely by having it in hand. I use this example principally because I know its existential force all too well.

This photographic compulsion led me to think of being a tourist as a spectrum of activity defined by the degree to which the eye dominates the experience. On one end, seeing is all; the other is multi-sensory. Perhaps it is toward the visual end that most tourists naturally gravitate. You go to see sights. You are told that you must see this, that, and the other thing. You haven’t really been to X if you haven’t seen Y. And so on it goes. It is, more often than not, sight that first mediates our experience of any place. Further, if what there is to see is new or strange or majestic or stunning, we will continue to equate being there with seeing. And wanting to render the ephemeral visual experience durable we will seek to capture it with photographs burdened all the while by the realization that our pictures will always disappoint.

Clearly, then, I tend toward this end of spectrum. But even I recognize that seeing is not the only way to experience a place, or even the best way. And so I try to listen and to smell. From time to time I will touch a building to feel the place. And, of course, there is the tasting. The camera captures none of this, and so there is nothing to do but to put it away and sit and observe, with all the senses, this place and these people and the dynamic reality we call culture that emerges from their interaction. To “take it all in” as is it is sometimes put.

But even at this multi-sensory end of the spectrum, there is something that did not quite sit right with me. I kept thinking that in the end it is all still driven by the impulse to consume, precisely to take in and take away. It was as those tribesmen feared; with the camera I was hunting for the soul of the place, somehow to disassociate it from the material space and absorb it into myself. And even when I set the camera aside and sought to capture the full sensory experience, the impulse was still the same. How can it be otherwise? The essence of tourism is not merely spatial; it is also temporal. A tourist is not simply someone who goes to a different place, but someone whose experience of that place will be temporary. The experience of tourism is always defined by the nearness of its end. And so always conscious that I can be in this place only so much longer, I try to hard to take it in, which is to say, to consume it.

While thinking about what a book on the philosophy of tourism might encompass and what historical antecedents it might survey, it seemed obvious that it would have to reckon with pilgrimage. Pilgrimage had already been on my mind. In fact, pilgrimage is never far from my mind as a resonant metaphor for the religious life.  But the idea of pilgrimage was nearer than usual after having serendipitously watched The Way just two days before embarking on my own less symbolically fraught journey.

The Way is a 2010 film written and directed by Emilio Estevez and starring Martin Sheen. The father and son pair play a father and son. Early in the film, Sheen’s character travels to France to recover the body of his son played by Estevez. Upon arriving in France, he discovers that his son died while having just begun the famed pilgrimage to Santiago de Compostela in northwestern Spain where the body of the Apostle James is reportedly buried. This discovery propels Sheen’s character to undertake the same journey with the ashes of his son in tow. Along the way he is joined by an unlikely set of three fellow pilgrims and the film tells the story of their transformation on the way to Santiago de Compostela.

It is not a profound film, but that is the worst one can say about it I think. It is an earnest film that manages to blend lovely scenery and charming characters in its gesture toward the profound. Along their premodern pilgrim way, the characters flash their postmodern sensibilities by engaging in a running debate about what constitutes authentic pilgrimage. Does making the trek on a bicycle negate the authenticity of the journey? Does recourse to credit cards? The modern hiking gear?

As the film makes plain, many now undertake the pilgrimage with very different motives than their medieval predecessors thus raising the question of authenticity. We can imagine that those most eager to define the authentic pilgrim experience might formulate their concern as an effort to protect the purity of the pilgrimage against the tourist ethos that animates so many that are now on the way. The zeal for purity stems from a desire to shield the experience from the encroachment of commodification and the dynamic of consumerism.

In the end, the film seems to suggest that whatever one’s motives, the road will have its own way. None of the pilgrims whose paths the film follows receive what they expected or desired, but each is transformed. We might say that it is they who have been consumed by the journey. Thinking about the film, it occurred to me that the better, more interesting spectrum placed tourism on one end and pilgrimage on the other.

Finally, it seemed to me that this was all about more than the literal trips we take for we are all, in a different sense, on the way. In our time of abandonment, home for most must now be a mythic place touched only by hope. We are untethered, unencumbered, uprooted. Under these conditions we have only to decide whether we are on the way as tourists or as pilgrims.

The opposition of consuming to being consumed is borrowed from William Cavanaugh. Hope in Time of Abandonment is the title of a book by Jacques Ellul. 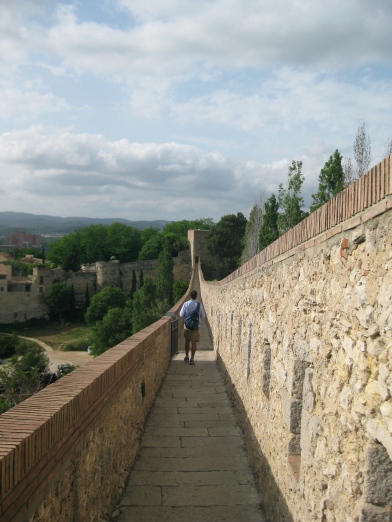 13 thoughts on “The Tourist and the Pilgrim”