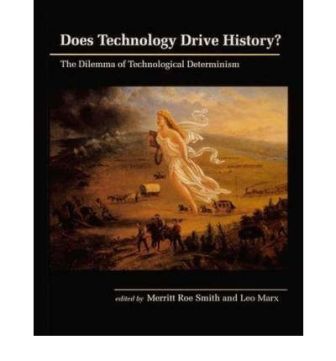 You may have gathered from some of my posts over the last couple of weeks, including the last one,  that I’ve been reading Does Technology Drive History?: The Dilemma of Technological Determinism edited by Leo Marx and Merritt Roe Smith. Previous posts have drawn on one or two chapters in particular. Here is a review of the whole for those who may be interested. Incidentally, the whole is quite complex and dense, so this does not do it justice. After the review, I’ll add just a few more thoughts that have occurred to me since writing the review. I’ve also edited out the paragraph on Marx’s essay since I discussed it at length in the previous post.

Having worked through the essays collected in this volume, one may be tempted to conclude that the title question finally dissolves into a debate about semantics and taxonomies. The dilemma is real enough, and palpably so. That technological determinism, as more than one author noted, is such a hard notion to dispel, that it is repeatedly resuscitated, that it can exert such a powerful influence upon the popular imagination — all of this suggests that “technological determinism” attempts, however unsatisfactorily, to name a phenomenon that is still in search of adequate description and explanation. The essays collected by Smith and Marx (a historically suggestive pair of surnames) in Does Technology Drive History? are an effort to name this elusive phenomenon.

The first two essays, by Merritt Roe Smith and Michael L. Smith respectively, provide a cultural frame for the succeeding discussion. They each draw on visual resources, particularly the lithography of Currier and Ives, to illustrate the deep and abiding faith in technologically abetted progress that animated American history. The iconography of railroads, steamships, and telegraph lines infused popular scenes depicting the advance of technology and civilization across the American continent, simultaneously dispersing darkness and displacing dissidents. These essays also point to the first of many distinctions that the reader must bear in mind as they attempt to hold the rich complexity of the debate in mind. The distinction in this case is between the fact and the idea of technological determinism. The status of the former is, of course, the question under debate. The latter, however, is a matter of belief independent of the ontological status of the object of belief, and it is apparent that belief in technological determinism functioned as an article of faith in nineteenth century America expressed most commonly under the banner of Progress.

In the remaining essays dealing with the question of “technological determinism’s” status as historical reality, we find more parsing, defining, and categorizing. The usual pattern is to define two extremes and then offer a third mediating position. The essays by Thomas Hughes and Thomas Misa each present a variation of this approach. Hughes seeks to stake out a position between technological determinism on the one hand and social constructivism on the other. He finds both accounts ultimately inadequate even though each manages to grasp a part of the whole situation. As a mediating position, Hughes offers the concept of “technological momentum.” By it Hughes seeks to identify the inertia that complex technological systems develop over time. Hughes’ approach is essentially temporal. He finds that the social constructivist approach best explains the behavior of young systems and the technological determinist approach best explains the behavior of mature systems. “Technological momentum” offers a more flexible model that is responsive to the evolution of systems over time.

If Hughes’ approach is essentially temporal, Misa’s account is in some sense spatial. He positions his approach between “micro-level” and “macro-level” approaches to technological systems. The claims made by macro-level analysis, technological determinism’s natural habitat, cannot be sustained at the micro-level. But large trends and the social consequences of technological change remain invisible at the micro-level. Misa recommends “meso-level” analysis focused on institutions of mediating scale situated “between the firm and the market or between the individual and the state.” At this level Misa believes scholars are most likely to integrate the social shaping of technology with the technological shaping of society.

Philip Scranton is likewise sensitive to matters of scale when he proposes that “totalizing determinisms” be replaced by “local determinations.” In his view, the resolution to the dilemma lies in particularizing the object of analysis. Scranton’s essay is a reflection on matters of historiography. He finds that master-narratives of progress and technological determinism have clouded the vision of historians of technology to the contingent and particular. His sensibilities are essentially postmodern and they include the rejection of grand narratives, the embrace of a “plurality of rationalities,” and a focus on matters of power differentials. He urges an approach which shares a certain affinity with Clifford Geertz’ “thick descriptions,” some of which might uncover local instances of technological determinism, but many more which will not.

Perhaps the most pertinent consideration that arises from the essays described above, as well as those that were not mentioned, is that the question of technological determinism is enormously complex. Because of this it might seem pedantic to note areas that were left unexamined, but it is curious that very little mention was made of what Walter Ong has labeled “technologies of the word.” These technologies — writing, printing, and later electronic means of communication — influence human beings at the most fundamental level, that of thought and expression. Whether they are finally endorsed or not, it seems negligible to omit mention of the work of Ong, his teacher Marshall McLuhan, or the German theorist Friedrich Kittler who, among others, have each in their own way drawn attention to the formative influence of communication technologies on individual consciousness and society.

Interaction with the work of practice theorists such as Pierre Bourdieu and Michel de Certeau might have also added yet another rich layer of analysis by seeking to locate the nexus of technology and society in the embodied rituals of everyday life which structure the lived experience of individuals. A mere hint in this direction is offered, incidentally it would seem, by J. M. Staudenmaier in his closing essay when he alludes to the “catechetical extremes of the Disney imagineers” in constructing the EPCOT experience. In fact, technologically inflected catechetical instruction of habits and beliefs is on offer throughout society, not only at EPCOT. Examining these technological dimensions of lived experience would seem to be yet another potential source for theorizing the question of technological determinism.

Altogether, however, the essays collected by Marx and Smith offer an invaluable entry into the debate over technological determinism and, through this debate, into the larger question of technology’s role in society. A question that is increasingly becoming more, not less pressing.

A couple of additional comments:

a. Media theorists (or media ecologists), philosophers of technology, and historians of technology could benefit from more interaction. Specialization is the rule of the academy, of course, and the professional associations, but the question of technology involves such an interdisciplinary set of considerations that it necessitates a variegated, inter-disciplinary approach. As I mentioned in the review, it is unfortunate that hardly any reference at all was made to the consequences of communication technologies for thought and expression. But, the flip side is that the theorizing of media theorists and the philosophizing of philosophers of technology is sometimes untethered from concrete, historical analysis and all the worse for it.

b. Against the technological determinists, many of the writers in this volume stressed the social construction of technology (see my posts on David Nye). The actual history of the adoption of technologies reveals very complex circumstances in which factors other than the nature of the technology drive the technology’s deployment and evolution. The social factors are the result of human agents acting on, against, with, for the technology in question. Okay, fair enough. But it is tacitly assumed that the human agents are always fully aware and rationally self-possessed. What if many of the choices are not the result of deliberate rationalization, but stem instead from pre-rational, unconscious, or habituated dispositions. And what if some of these are the result of previous long-term engagement with certain technologies? This brings us back to the media theorists who are sensitive to the manner in which our media condition or thinking and acting. I tried my hand at approaching the question here: “Technology, Habit, and Being in the World.”

5 thoughts on ““Does Technology Drive History?”: A Brief Review”