“When you visualize a man or woman carefully, you could always begin to feel pity.”  Or so the nameless priest in Graham Greene’s 1940 novel, The Power and the Glory, thought to himself as he sat in a dark, dank, crowded jail cell accosted by a self-righteous woman intent on exposing his unworthiness.

The unnamed priest, however, needed no convincing.  Earlier in the novel we read that,

He was a bad priest, he knew it:  they had a word for his kind — a whiskey priest — but every failure dropped out of his sight and out of mind:  somewhere they accumulated in secret — the rubble of his failures.  One day they would choke up, he supposed, altogether the source of grace.  Until then he carried on, with spells of fear, weariness, with a shamefaced lightness of heart.

The Power and the Glory is set in the Mexican state of Tabasco during the 1930’s when the Red Shirts, a rabidly anti-clerical paramilitary organization, came to power and brutally suppressed the Catholic Church.  Greene’s protagonist, along with Padre Jose, a priest who agreed to marry and forsake his calling in exchange for his life, are the last vestiges of the Church in the state. 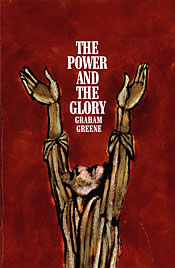 Throughout the story the whiskey priest eludes a fanatical police lieutenant who is hell bent on eradicating each and every reminder of the state’s religious past.  “He wanted to destroy everything,” the narrator’s voice explains, “to be alone without any memories at all.”  While evading capture, the nameless priest reluctantly and with an ever-present sense of his worthlessness ministers the sacraments in secret.  He hears confession in the darkness before dawn, he holds a Mass with illicit wine — the Red Shirts also banned alcohol — in dingy jungle huts, and finally he forsakes the promise of safety across the state border to attend to an American convict dying of a gun shot wound that he might be absolved.

Through it all, as author Scott Turrow recently put it, “he emerges as a figure of intense humility and faith, willing to sacrifice himself to attend in secret to the devoted and utterly unaware of his own goodness.”  Not unlike Christ, who in John’s Gospel returns to Jerusalem fully aware that it will cost him his life in order to attend to the dying Lazarus, the priest returns to attend to the dying American knowing that he is to be betrayed to the police and most likely executed.  And indeed, that is the path marked out for him.

In the concluding pages of the novel, after the priest has been unceremoniously executed, an event we witness through the eyes of an English dentist with whom the story had begun, we revisit a number of the families and individuals who along the way had harbored or otherwise interacted with the nameless priest.  In each case, we discover that the priest’s presence among them had been consequential — perhaps ambiguously so, but felt and remembered nonetheless.  This was particularly evident in the case of a young boy whose family had early on sheltered the whiskey priest.  At various points in the novel we listen in as the mother reads to the boy and his sisters an account of the death of a famous Mexican martyr.  The boy had been distracted, unimpressed.  But in the end, when he learns that the shabby priest with the “funny smell” who had been in their very house was also put to death, had now also become a martyr, he has a change of heart.

It brought it home to one — to have had a hero in the house, though it had only been for twenty-four hours.  And he was the last.  There were no more priests and no more heroes. 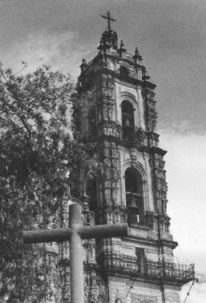 The priest’s presence, in retrospect, had made the difference.  This appears, from one perspective, to be the central premise of the novel.  By contrast, the oppressive quality of the setting is early on described as a “huge abandonment,” and the antagonist, the hell-bent lieutenant, was marked by the experience of a “vacancy,” and absence.  The priest, tortured by his own failures — often drunk and father of an illegitimate child — cannot quite see the significance of his presence.  He is in his own eyes merely a “fool” who “loves all the wrong things.”  But it is his presence we learn that has made all the difference, that has given hope and sustained faith.

In that prison with which we began, in the darkness, the priest gives profound expression to the significance of presence.

When you visualized a man or woman carefully, you could always begin to feel pity … that was a quality God’s image carried with it … when you saw the lines at the corners of the eyes, the shape of the mouth, how the hair grew, it was impossible to hate.

Greene considered The Power and the Glory to be his best novel.  Critics including John Updike, who wrote the Introduction to the 50th Anniversary Edition, agreed.  It is frequently listed among the best novels of the 20th century.  I read The Power and the Glory while also reflecting on the theme of presence along the lines suggested by Jaron Lanier.  Lanier drew attention to what we might call our presence to ourselves, that is our full engagement in our own experience that was threatened whenever our desire to record and publish our lives through social media led us to fragment our focus and our attention, to become spectators of our own lives.

Reflecting on Greene’s novel provided yet another angle from which to think of presence.  It suggested that our presence to one another may be the most significant gift we can offer.  Alienation and loneliness are still with us.  We speak incessantly of our living in a “connected” age, and indeed it has never been easier to make and maintain connection.  But connection is not presence.   It is true that very often, especially where great distance separates us, a connection is all we can offer — it is better than nothing.  But how often do we fail to give our whole presence to one another when we are separated by feet and inches?  How often do we fail not only to give our own, but to perceive the other’s presence so that we may notice “the lines at the corners of the eyes, the shape of the mouth, how the hair grew”?

Like the unnamed whiskey priest, we may never know what difference our presence will make in the life of another.  What we do know is that our absence, whether literal or effected by our fractured inattentiveness, may in the end contribute to a “huge abandonment.”