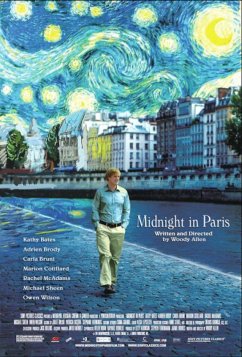 The past may be a foreign country where they do things differently as the L. P. Hartley line has it, but it is one to which many would readily immigrate given the opportunity. If you are among them, Woody Allen’s Midnight in Paris will likely enchant and delight you. (Warning: some spoilers ahead.) Gil, the main character played charmingly by Owen Wilson, and his fiancée tag along with her parents who have come to Paris on a business trip. She and her parents are crassly materialistic, he is a romantic — a romantic in love with the city, particularly its Jazz Age past. Having been a successful, but disenchanted Hollywood film writer he is determined to write real literature, even if it means surrendering the upscale lifestyle his fiancée craves. While they shop for chairs that cost as much as a moderately priced four-door sedan, he frequents outdoor shops that sell vintage vinyl records and works on his novel about a man who owns a nostalgia shop. The theme of his would-be novel tracks closely with Gil’s own sensibilities. He obsesses over the past and its artifacts, and his obsession is an index of his dissatisfaction with the present.

Without even a gesture toward explantation, and all the better for it, a vintage Peugeot filled with revelers stops to pick up Gil just after a clock has struck midnight. Gil, with some hesitation, joins the merry crowd and finds himself transported back to the 1920’s and the Paris of his dreams. Endearingly awestruck throughout the experience, he meets the Fitzgeralds, Hemingway, Gertrude Stein, T. S. Eliot, Picasso, Dali, Cole Porter, and a host of other luminaries just entering into the fullness of their legend. Each night he rides into the past, and each morning he finds himself again in the present, a progressively unfulfilling present.

When he is in the past, Gil comes alive. The characters are inspired: Adrien Brody plays a delightfully quirky Salvador Dali and Corey Stoll is almost absurdly intense as Hemingway. Kathy Bates’ Gertrude Stein provides Gil with straightforward counsel regarding life and writing. Gil, as he becomes increasingly at ease in the past, offers Luis Buñuel a suggestion for a film in which guests find themselves unable to leave a room. Buñuel, perplexed, wonders why they cannot simply walk out.  He also finds in Picasso’s lover Adriana, a woman who stirs his heart and a kindred spirit. Simply put, the past rekindles Gil’s passion.

Yet, Allen finally wants to critique nostalgia and reaffirm the present. The film builds up to an overly didactic moment when Gil, realizing that he cannot remain in the past indefinitely, launches into a not quite moving appreciation of the present. Allen foreshadows the moment throughout the film. While delivering one of his impromptu lectures, Paul, a pedantic intellectual and friend of Gil’s fiancee, pontificates about the “Golden Age Fallacy,” the unsubstantiated belief that the greatness  of some prior historical era eclipses the present, a chronological version of the grass is always greener. The character of Adriana is herself unimpressed with the ’20s and nostalgic for 1890s Paris, La Belle Époque. When Gil and Adriana, Inception-like, delve even further into the past via horse-drawn carriage they meet up with Degas, Gauguin, and Toulouse-Lautrec just as La Belle Époque commences.  But we find those  artists similarly dismissive of their own age believing it pales in comparison with the Renaissance. And it is then that Gil realizes the futility of inordinately longing for another age.

He returns to the present, reorders his life, and walks off happily ever after in the Paris rain. And we, likewise, leave the theater, returning to our own present, cured of our nostalgic longings, and determined to seize the moment. Yet, the film lingers in our minds and as we revisit it, we find ourselves charmed. It works its magic as we turn it over in our memory. Wasn’t the “Golden Age Fallacy” introduced by the most unlikeable, pompous character in the film? Wasn’t the past portrayed in delightful, vivacious, enchanting fashion? Wasn’t Gil, in fact, nourished and invigorated by his dalliances with the past? While Gil chose to return to his present, did not Adriana choose to stay in La Belle Époque? Finally, wasn’t Gil’s other climatic epiphany (that I will not spoil) revealed in the past?

Certainly, the past is shown to be complex and disordered in its own way. In one of the few more sober scenes, Gil and Adriana, on a moonlit stroll through the city, come upon Zelda Fitzgerald very near to taking her own life. Yet, even here there is ambiguity. Gil offers Zelda Valium which we learn he has been taking to cope with the anxieties of an impending wedding. Are we to conclude that while the past bequeaths great art and literature to the present, the best the present can offer the past is Valium? Not quite I suppose, I do recall penicillin also being mentioned at some point.

Midnight in Paris takes nostalgia as its theme, but the difficulty with any exploration of nostalgia is that in common usage the word indiscriminately names too many sensibilities, unfortunately dismissing appropriate and enriching ways of being with the past. Altogether, the film helpfully suggests that there is more than one way to have a disordered relationship to the past. We may succumb to the “Golden Age” fallacy and refuse the present, or we might also reject the past altogether uprooting ourselves from that which gives depth of field to lived experience. While Gil chooses the present, it is clear that the past nourished and educated him. While he has chosen not to live in the past, he has not abandoned it either. He will not live in it, but he will live with it.

It was Buñuel who wrote in his autobiography,

You have to begin to lose your memory, if only in bits and pieces, to realize that memory is what makes our lives.  Life without memory is no life at all …  Our memory is our coherence, our reason, our feeling, even our action.  Without it, we are nothing.

Thus we may turn the commonplace on its head and suggest that the past is the only place we can live.

3 thoughts on “Midnight in Paris: Learning to Live With the Past”