UPDATE: A complete and updated form of the essay began here is now available here. 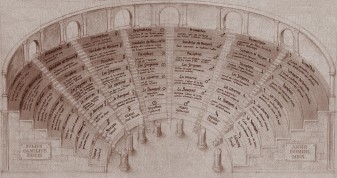 Early in The Art of Memory

, Frances Yates pauses to envision a “forgotten social habit” of the classical world.  She invites us to wonder,“Who is that man moving slowly in the lonely building, stopping at intervals with an intent face?”  That man, Yates tells us, is a “rhetoric student forming a set of memory loci.”  The rhetoric student would have been creating the architecture of a mental space into which they would then place vivid images imaginatively designed to recollect the themes or words of a prepared oration.  While delivering the oration, the rhetor would navigate the mental space coming upon each carefully placed image which triggered their memory accordingly.  This work of designing mental space and populating the space with striking images followed the prescriptions of the artificial memory techniques widely practiced in classical antiquity.

What if, however, we updated Yates’ scene by setting it in the present?  The scene would be instantly recognizable as long as we equipped our imagined person with a cell phone.  The stopping at intervals and the intent face would correspond to any of the multiple uses to which an Internet-enabled smart phone may be put:  reading or sending a text message, downloading songs, taking or sending pictures and video, updating social media profiles, or finding directions with GPS, to name but a few.  What is striking is how often these activities would, like that of the ancient rhetor, involve the work of memory.   Much of what cell phones are increasingly used for has very little to do with making a phone call, after all. In fact, one could argue that the calling feature of phones is becoming largely irrelevant.  Cell phones are more likely to be used to access the Internet, send a text message, take a picture, or film a video.  Given these capabilities cell phones have become prosthetic memory devices; to lose a cell phone would be to induce a state of partial amnesia.  Or, it may be better to say it would might induce a fear of future amnesia since our ability to approach the present as a field of potential memories would be undermined.

Social networking sites (SNS) are of special interest because of the way in which they explicitly trade in memory.  As Joanne Garde-Hansen asks in “MyMemories?:  Personal Digital Archive Fever and Facebook,” “If memory and identity can be seen as coterminous and SNSs involve literally digitising ones’ self into being then what is at stake when memories and identities are practiced on Facebook?”

She goes on to add,

It goes without saying that the allure of the site is in its drawing together in one place memory practices: creating photograph albums, sharing photographs, messaging, joining groups and alumni memberships, making ‘friends’ and staying in touch with family.

It would be fair to acknowledge that SNS such as Facebook traffic in more than the allure of memory practices. Nonetheless, the production, maintenance, and retrieval of memory is integral to the practices deployed on SNSs.

Following Jacques Derrida, Garde-Hansen considers Facebook as an instance of the archiving archive. Thus, she points out, the architecture of a SNS such as Facebook is not neutral with respect to the memories it archives.  As Derrida observed,

Garde-Hansen also draws SNSs into the conflict between database and narrative staged by Manovich in The Language of New Media.  In her view, the most significant aspect of Manovich’s analysis of new media for SNSs is the comparison he draws between the visual organization of new media interfaces and spatial montage.  “Manovich’s emphasis upon spatial narrative is,” according to Garde-Hansen, “extremely pertinent to thinking through the emergence of SNSs and how these sites remediate personal and collective memory.” Framed in this way, memory as spatial montage challenges “the rise and dominance of history,” the “power of the written word” to order the past temporally, and the “twentieth century’s emphasis upon the single, unadulterated image (think cinema).”

Derrida’s insight suggests that given the way the architecture of an archive already determines what can in fact be archived, the future record of the past is already impinging upon the present.  Or, put otherwise, the sorts of memories we are able to generate with social media may already be directing our interactions in the present.  (For an insightful discussion of this point anchored on an analysis of faux-vintage photography see Nathan Jurgenson’s, “The Faux-Vintage Photo.”)  Drawing in Manovich’s database/narrative opposition, suggests that the visual/spatial mode of ordering memories on SNSs potentially shifts how meaning is derived from memory and how we construct the self.  We’ll explore both of these considerations a little further in subsequent posts.

Returning to the scene suggested by Yates, however, we may also consider SNSs such as Facebook as instances of new artificial memory spaces constructed to supplement and augment the natural memory.  Already in the artificial memory tradition we have memory rendered spatially and visually in a manner that anticipates the representation and organization of memory in SNSs.  Situating SNSs within the long history of spatial and visual memory also affords us the opportunity to consider SNSs in the context of a complex and rich tradition of philosophical reflection.

What emerges is a history of memory practices that alternate between a Platonic focus on memory as the presence of an absence and an Aristotelian emphasis on memory as the record of the past.  There are several thematic threads that weave this story together including the opposition of internal memory to memory supported by inscription, the connection between memory and imagination, memory as the index of desire, the related tensions between space and time and databases and narratives, and the relationship of memory to identity.  Yet for all the complexity those themes introduce, we will begin our next post in this series with a story.

3 thoughts on “Social Media and the Arts of Memory”