Here is a story that came out of Melrose, Massachusetts yesterday:

According to the Boston Globe, no fewer than 11 Melrose varsity athletes were recently identified in illegal possession of alcohol or tobacco in photos which first surfaced on Facebook. The photos were taken from the site by a concerned parent, transferred to a thumb drive and submitted to the school’s administration as proof of inappropriate actions by the student body.

By now these stories are not too surprising; the only surprise may be in the fact that people are still being this careless with social media and incriminating or embarrassing images.  But then we realize that we are still learning to cope with what our media has enabled; to paraphrase W. H. Auden, we clearly cannot understand, what we can clearly do.  Writing in New Scientist, Sumit Paul-Choudhury recently observed,

Right now, though, we are living through a truly unique period in human history. We have learned how to create vast digital legacies but we don’t yet know how to tidy them up for our successors. The generations that went before us left no digital trace, and the ones that go after might leave nothing but sanitised “authorised biographies”. We will be defined through piecemeal and haphazard collections of our finest and foulest moments. 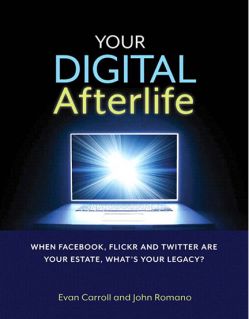 Paul-Choudhury’s article, “Digital legacy: The fate of your online soul,” explores how we are learning to manage the collection of digital data which becomes our online legacy, or what Hans-Peter Brondmo has evocatively called our “digital soul.”  Paul-Choudhury is, perhaps, more suited than most to write about this issue since six years ago he created a site to commemorate the life of his wife who passed away after a long battle with cancer.  Then it may have seemed a bit strange to wonder about one’s digital legacy, by now there are conferences and organizations devoted to the matter and plenty of  media attention as well.

In his article, Paul-Choudhury argues that we have not quite figured out how to manage the wealth of information that will survive us, and he identifies two principle approaches that have evolved in recent years:  the “preservationists” and the “deletionists.”  The names, I suspect, are self-explanatory.  Some argue that we should seek to save and preserve every last bit of data that we can, and others suggest that the more humane approach involves learning how to allow the possibility of forgetting.

The most prominent name on either side is probably Viktor Mayer-Schonberger (this post, incidentally, is apparently evolving a hyphenated name theme), the author of the 2009 book, Delete: The Virtue of Forgetting in the Digital Age which argued for the wisdom of creating tools that enabled the gradual erasure of online data over time.  He recommends that digital data be constructed so as to “digitally rust” to allow for a graceful forgetting that mimics the ordinary workings of human memory.  In his view, the problem is that we are now remembering too much and this finally becomes unbearable.  It reminds me of Paul Ricoeur’s suggestion that while in the  past learning the arts of memory was a prized skill, we may now need to cultivate an art of forgetting.

As we’ve noted before, however, others have pointed out that digital data is not nearly so resilient and durable as we are led to believe.  In fact, unfathomably large amounts of data are lost each year.  Paul-Choudhury cites Marc Weber of the Computer History Museum who observes that, “Digital records are more like an oral tradition than traditional documents, if you don’t copy them regularly, they simply disappear.” Web sites go dark, files are corrupted, servers fail — all of this does render our digital legacy a bit more fragile than we might imagine.

On the whole, however, it does seem as if most of us are generating much more by way of relatively permanent and accessible memories and remembrances than most of our forebears, except perhaps the most assiduous diarists, would have been capable of producing.  Of course, the contrast with the diarist may be precisely the issue at the heart of the debate between the preservationists and the deletionists.  The diarist filters and orders their memories, much of what we are storing is not quite so filtered and ordered.  Perhaps more importantly, the diary was private.  Our digital memories are mostly public.

On the one hand this enhances the memories.  For example, Paul-Choudhury notes that his photos on Flickr “are surrounded by a rich history of social interactions, from groups to which I belong to comments that friends have left about my photos.  That feels  just as much part of my digital soul as the images themselves.”  On the other hand, it is the public nature of the memories that renders them susceptible to malicious use by others and makes it more difficult to curate our online identity.

While it is intriguing to think about the digital legacy that will survive us, it may be more pressing to think about the significance of these issues for us while we remain in the land of the living.  Writing about the nineteenth century in Present Past, Richard Terdiman identified what he called a “crisis of memory” arising from the temporal dislocations associated with the French Revolution.  Memory or history no longer seemed a continuous flow into which modern people could easily place themselves.  Perhaps we may begin to think about a contemporary crisis of memory that arises not from our dislocation from tradition, but from our dislocation from our memories themselves.  Our memory may be at once, too present, and not present enough.  Now it is not only that we are unable to integrate our own lives with cultural memory, we may be having a hard time integrating our our own memories with our experience of life.

It is true that much of our memory has always to some degree been external to us, but sometimes degrees of difference amount to qualitative change.  We have been busily uploading our memories over the last several years creating an artificial memory of truly unprecedented scope.  The consequences of this exponential growth of memory are as of yet unclear, but it may be that we are creating for ourselves a year of cruel Aprils.

April is the cruelest month, breeding
Lilacs out of the dead land, mixing
Memory and desire, stirring
Dull roots with spring rains.

One thought on “Digital Legacies, Online Souls, and the Burdens of Remembering”