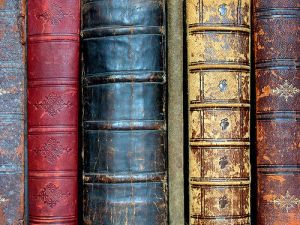 Budget cuts have put over 450 libraries across the UK in jeopardy and consequently launched protests and a vigorous campaign to save the libraries.  Writing in Prospect Magazine, Leo Beneditus suggests that while this is unfortunate, the whole situation is not quite so desperate as the rhetoric of the library enthusiasts make it out to be.  The sky, Benedictus, suggests is not quite falling. Perhaps.  I don’t have a specific point to make here, so much as a few observations:

For one thing, Benedictus is correct to observe,

Listening to a declaration of how wonderful books are (World Book Night, on 5th March, was one recent example), what I hear most loudly is a group of people feeling they have to say so. No one troubles to declare this for computer games.  Instead of making books seem fun, the well-intentioned merely spread a whiff of burning martyr round the act of reading.

Theodor Adorno, Alasdair MacIntyre, and others I’m sure, have pointed out that something has already given way when a culture begins to rationalize its moral code.  Ethics is a sign that moral consensus has already broken down and often amounts to little more than a rear-guard action.  Impassioned defense of the book may likewise signal the passing of an era.

I’m not certain if the subtitle of the article was penned (keyed?) by Benedictus or some editor, but it reads:

It’s a shame some libraries are closing, but this is not the end of civilisation. Quite the opposite.

Benedictus goes on to warn about the “overuse” of books:

One might argue that books offer a better education than games, but they are also more isolating—there are no two-player books—and just as prone to being overused.

It would be hard to imagine what the overuse of books might look like, but I suppose in principle it is possible. But the idea that books are isolating is only partly true.  Reading a book does initially isolate the individual, I’m reminded of Julian Smith’s fantastic music video; but a book, precisely by speaking to our inner self, reminds us that we are, none of us, so isolated that others cannot put words to our experiences.  In this way, books immerse us in solitude only to reconnect us more profoundly with the world around us.  Needless, to say a book may also connect us intimately with the experience of others by providing a window into their experience that is unavailable otherwise.

Later on, speaking of the potential virtue of e-readers, Benedictus suggests that,

Freed from paper in this way, books have a much better chance of becoming cool again.

In the first place, the pursuit of “cool,” is always decidedly uncool.  Beside that, though, it is a curious statement to make because it confuses a text for a book.  A book freed from paper (unless you are imagining papyrus or vellum) is an oxymoron.  And this, perhaps, begins to reveal a deeper assumption at play in Benedictus’ essay — materiality is insignificant.  The book as object does not matter. Perhaps what is needed is a work of art along the lines of Magritte’s “This Is Not A Pipe” in order to provoke us into understanding the significance of textual materiality.

Reading is imagined merely as the transfer of immaterial data from one container (book, e-reader, etc.) to another (the human brain).  This seems blind to the significance of the embodied experience involved in reading a book which activates each of our senses in very particular ways, ways an e-reader (regardless of its virtues otherwise) simply cannot.  E-readers, of course, have their own materiality, and that matters as well.

Discounting materiality also ignores the manner in which the book as object, by virtue of its particularity, is the repository of a host of memories and associations.  A book can only be itself and so collects around itself its own unique history; the e-reader is every text it used to read, and thus it is simultaneously none of them.  I remember where and when I bought many of my books.  I remember where I read them and to pick up certain books is to be transported back to different moments in my life.  The book as object, its particular and unique materiality, matters.  This is not to suggest that e-readers have no place and no benefits, but it is to suggest that moving from books to an e-reader is not a transaction without remainder.

A failure to recognize the significance of materiality may also be at play in the willingness to bid adieu to the library.  Benedictus concludes his essay by noting that,

When the children of 2011 look back, they will not see this as the year their local libraries were taken away. This will be the year they all got libraries of their own.

Perhaps, but notice the equivocation.  “Libraries closed” are not the same thing as “libraries of their own.”  The former refers to a material fact, the latter refers vaguely to an assemblage of data.   In any case, when they do look back, if they do, they may also be oblivious to the rich and textured experience of reading that attended those curious relics of a past civilization.

2 thoughts on “This is Not a Book”