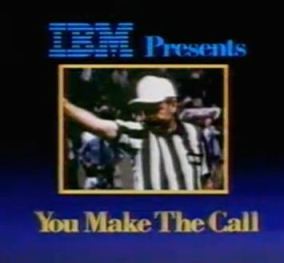 Remember those IBM “You Make the Call” spots during NFL games that used to show you a controversial play and then ask you to make the call before revealing what was in fact the right call?

A recent Pew survey has been widely taken to suggest that Internet use doesn’t kill healthy social life after all.

A recent Stanford study suggests to some that social media, Facebook in particular, is making us sad.

You make the call!

Admittedly, this is not exactly an either/or situation, it may even be both/and, I just felt like alluding to the vintage commercial.  (Follow that last link and you’ll also see some vintage Tandy and IBM computers.)

Here’s a little more from each.  Regarding the Pew survey:

Twitter users were the most social. 85 percent of them were involved in group activity offline, followed by 82 percent of social networking users. The results from the survey identify the use of social media and online activities as helpful in the process of disseminating information and engaging group members.

“The virtual world is no longer a separate world from our daily life and lots of Americans are involved in more kinds of groups,” said Rainie.

From the Slate story about the Stanford study:

Facebook is “like being in a play. You make a character,” one teenager tells MIT professor Sherry Turkle in her new book on technology, Alone Together. Turkle writes about the exhaustion felt by teenagers as they constantly tweak their Facebook profiles for maximum cool. She calls this “presentation anxiety,” and suggests that the site’s element of constant performance makes people feel alienated from themselves. (The book’s broader theory is that technology, despite its promises of social connectivity, actually makes us lonelier by preventing true intimacy.)

With that excerpt I’m killing two birds with one stone by pointing you to Sherry Turkle’s most recent work which has drawn considerable attention over the last month or so. See Johah Lehrer’s review here and, in a lighter vein, watch Turkle on The Colbert Report here.

Also of interest in the Slate article is the differentiation between male and female use of Facebook:

Facebook oneupsmanship may have particular implications for women. As Meghan O’Rourke has noted here in Slate, women’s happiness has been at an all-time low in recent years. O’Rourke and two University of Pennsylvania economists who have studied the male-female happiness gap argue that women’s collective discontent may be due to too much choice and second-guessing–unforeseen fallout, they speculate, of the way our roles have evolved over the last half-century. As the economists put it, “The increased opportunity to succeed in many dimensions may have led to an increased likelihood in believing that one’s life is not measuring up.”

If you’re already inclined to compare your own decisions to those of other women and to find yours wanting, believing that others are happier with their choices than they actually are is likely to increase your own sense of inadequacy. And women may be particularly susceptible to the Facebook illusion. For one thing, the site is inhabited by more women than men, and women users tend to be more active on the site, as Forbes has reported. According to a recent study out of the University of Texas at Austin, while men are more likely to use the site to share items related to the news or current events, women tend to use it to engage in personal communication (posting photos, sharing content “related to friends and family”). This may make it especially hard for women to avoid comparisons that make them miserable. (Last fall, for example, the Washington Post ran a piece about the difficulties of infertile women in shielding themselves from the Facebook crowings of pregnant friends.)

Regarding the Pew survey, I’m wondering if it says as much as its proponents take it to say.  I’m not sure it necessarily says much about the quality of the social interaction involved, but more significantly, dividing the population between Internet users and non-Internet users seems less than helpful and may give us nothing deeper than mere correlation.

Regarding the Slate story, find the strong push back in the comment section from the woman who benefited from Facebook during a time of deep depression.  Generalizations will never be without exceptions, of course, and it may be more helpful to think of social media exacerbating rather than causing certain dispositions or emotional states.

4 thoughts on “Social Media: Good for Groups, Bad for Individuals?”