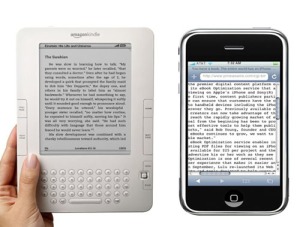 I’ve recently been emailed two interesting posts that intersect nicely with my reading of Illich’s In the Vineyard of the Text.  Illich is looking back at a transition in reading technologies and practices in the 12th century in order to gain perspective on the transformation taking  place when he is writing in the early 1990’s.  Illich’s analysis may be even more timely now, 15+ years after he wrote, as e-readers seem to have finally caught on and secured widespread acceptance and use.

The first post, “Bye, Bye, Borders?” by Megan McArdle at The Atlantic, considers recent rumors about the imminent demise of Borders (rumors which most likely are not, as in the case of Mark Twain, greatly exaggerated).  Here is her main point:

Personally I hope they’re wrong, too; like most writers, I like bookshops.  I suspect most of us had our destiny shaped while we were sandwiched behind the bookshelves at our local dealer.

On the other hand, like most of the writers I know, I rarely go into bookshops anymore.  Instead, the UPS truck stops at our house at least once a week, thanks to Prime, and more and more, I order Kindle books straight from my iPad.  I know that I am missing something–the serendipity of browsing through the bookshelves–which I have never replaced at Amazon; much as I love the convenience of online shopping, I never find anything that I am not looking for.

This is when the communitarians start looking for a government rule that will make it harder for people to buy books online; the environmentalists complain about all the energy wasted on shipping; and the moderate nostalgists start urging people to support their local bookstore.  But I’ll go by a combination of revealed preference and introspection:  the world may be better off without Borders, even though I (and everyone else who has stopped shopping there) likes the idea of its existence.

There is a certain irony here since it was not that long ago that Borders and Barnes & Noble were the villains, not the victims, in the story we told about the demise of small, independent books shops.  You remember You’ve Got Mail, no?

The second post, “Open Books:  The E-Reader Reads You” by Rob Horning at The New Inquiry, considers the wealth of data about the user that becomes available to publishers and distributors through E-Readers like Amazon’s Kindle.  Horning makes a number of observations that pair up suggestively with themes in Illich.  Consider this paragraph, for example, in which Horning cites literary critic Franco Moretti:

That is, the truth about them for publishers will be no different from what it is for distant-reading critics like Moretti — a matter of tabulated, graphable data. “Distance, let me repeat it, is a condition of knowledge: it allows you to focus on units that are much smaller or much larger than the text,” Moretti argues. “And if, between the very small and the very large, the text itself disappears, well, it is one of those cases when one can justifiably say, Less is more.”

Moretti’s advocacy of distance appears a ways down a road tread by Hugh of Saint Victor’s when he advocated a pilgrim ethic for scholars summarized as follows by Illich:

With the spirit of self-definition, estrangement acquires a new positive meaning.  Hugh’s call away from the ‘sweetness of one’s native soil’ and to a journey of self-discovery is but one instance of the new ethos . . Hugh’s insistence on the need that the scholar be an exile-in-spirit echoes this mood.

Like McArdle, Horning explores the loss of the physical bookstore (or library) as a place of serendipitous discovery in light of increasingly sophisticated recommendation algorithms used by online booksellers.

Thanks to these innovations, publishers will know what books you’ve read; when you read them; what you chose to read next, or simultaneously; how long it took you; and what other books people read when they read what you have. The potential data mine this all represents may eventually divest readers of their need to discover anything. Instead, recommendation engines can take over, manufacturing serendipity for users as is already the case on Amazon’s website, only now with the not necessarily solicited advice being ported directly into the scene of reading. And if you shop through Google’s new bookstore, all that information and be joined with all the data derived from your search and browsing histories to further refine recommendations and circumscribe the scope of what is readily offered to you.

Horning, however, is slightly less sanguine than McArdle:

But perhaps more important, publishers will be able to draw from trends in this rich data for its editorial decision making, exploiting connections this information reveals among various demographics in the reading public, calibrating their lists to actual reader behavior with more precision that dumb sales data once allowed. Such rapid responsiveness can trigger a feedback loop that precludes the possibility of spontaneous, unexpected desires, fashioning a smoothly functioning market sealed off from vital disruptions. Readers will be sealed in the tombs of their revealed preferences. To capture the feeling of discovery and possibility again, they will have to look somewhere other than books.

The most startling contrast is clearly between McArdle’s somewhat begrudging embrace of “revealed preference” and Horning’s characterization of the same as “tombs” into which readers will be sealed.  Horning’s concerns also echo those of Jaron Lanier which we noted here a couple of months ago:

Students spend a lot of time acting as trivialized relays in giant schemes designed for the purposes of advertising and other revenue-minded manipulations. They are prompted to create databases about themselves and then trust algorithms to assemble streams of songs and movies and stories for their consumption . . . . The problem is that students could come to conceive of themselves as relays in a transpersonal digital structure.

The title of Horning’s post is interesting in this regard:  “Open Books:  The E-Reader Reads You.”  There was also a sense in which the book read the reader in twelfth century.   The book presented the reader with an external standard to which the reader, depending on the text,  may need to conform.  This is why Hugh believed reading and learning required humility.  Without humility the reader would fail to subject his own views and practices to the order of things that a text may reveal.  In other words, the book read the reader by illuminating where the reader must change; the reader read to discover an order to which they must align their inner world.  The technology bundled with the E-reader, and the economic models it participates in, reads the user and precisely the opposite sense.  It reads the reader in order to bring external realities into conformity with the existing internal dispositions of the user.

What reading is and is for, what counts for knowledge and wisdom, the rise and fall of social hierarchies — these have been transformed over the course of time as new technologies for representing and communicating human thought have emerged .  With Illich, I’m hopeful that understanding past developments in these areas will give us some guideposts to steer by as we experience these types of transformations in the present.

Thanks to Mr. Ridenhour and Mr. Greenwald for the links.