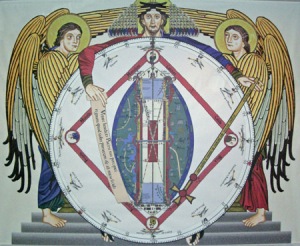 Excerpts from the second chapter of Ivan Illich’s In the Vineyard of the Text, “Order, Memory, and History.”  Previous posts:  Introduction and first chapter.

From the first few excerpts, one gets a feel for a mental world which had not yet divorced the sign from the signifier and still regarded the cosmos as inherently meaningful, like a book to be read.  Most of what follows centers on the fascinating history of memory techniques and Hugh’s attempt to revive these techniques as the foundation of the search for wisdom.  What we end up with then is an effort to microcosmically represent the macrocosmic order of things in the mind.  The mind symbolically captures the order of the cosmos.  I hope the excerpts below convey the gist of this ambitious project.

(Read here for an excellent recent essay delving into the history of memory techniques and books.)

Read here about a recent digital reconstruction of Hugh’s ark by Conrad Rudolph of the University of California and commissioned by the US National Gallery of Art.  Click on the image above for a more detailed representation.