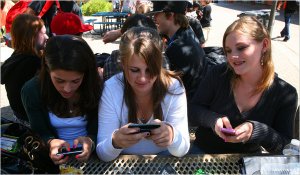 A few days ago the NY Times ran a piece by Matt Richtel called “Growing Up Digital” which remains at the moment the most emailed, most blogged, and most commented article on their site.  The piece does not necessarily break any new ground, but nicely summarizes some concerns that are on the minds of parents, teachers, and anyone who is just a bit unsettled by the emerging shape of the digital mode of being in the world.   This will be the first of probably two posts featuring excerpts from the Times story accompanied by a few elaborations beginning with . . .

Students have always faced distractions and time-wasters. But computers and cellphones, and the constant stream of stimuli they offer, pose a profound new challenge to focusing and learning.

An often overlooked or dismissed point.  Many people seem to take some comfort from saying, “this sort of thing has always been around” or “kids have always had distractions” and the like.  But while placing phenomenon on a spectrum is sometimes helpful for the sake of understanding and perspective, it often masks real transformations.  Sufficient difference in quantity can amount to a difference in quality.  A hurricane is not just a stronger breeze.  On the color spectrum it may be hard to pinpoint where the transition takes place, but at some point you are no longer orange, but blue.  Differences in scale have put us in new territory.

Researchers say the lure of these technologies, while it affects adults too, is particularly powerful for young people. The risk, they say, is that developing brains can become more easily habituated than adult brains to constantly switching tasks — and less able to sustain attention.

Adults writing on this topic who find that they have entered the digital world and believe themselves to have retained their print-literate skills often fail to recognize the difference it might make to be a digital native rather than a digital immigrant.  Adults above the age of 35 or so were brought up with a non-digital skill set associated with print (although television had already been altering the skill-scape).  Those who can’t remember not having a smart-phone or 24/7 access to the Internet are in a very different situation.  They have the digital skill set, but never picked up more than the remnants of the print skill set.  They are not in the same position as the older generation who naively look at the situation and say, “Well, I can do both, so they should be able to also … no problem here.”

But even as some parents and educators express unease about students’ digital diets, they are intensifying efforts to use technology in the classroom, seeing it as a way to connect with students and give them essential skills. Across the country, schools are equipping themselves with computers, Internet access and mobile devices so they can teach on the students’ technological territory.

Done uncritically and re-actively this amounts to digging your own grave (please note the qualifiers at the start of the sentence before becoming angry and dismissive).  To borrow and re-appropriate a line from Postman, it is not unlike “some turn-of-the-century blacksmith who not only is singing the praises of the automobile but who also believes that his business will be enhanced by it.”

The principal, David Reilly . . .  is determined to engage these 21st-century students. He has asked teachers to build Web sites to communicate with students, introduced popular classes on using digital tools to record music, secured funding for iPads to teach Mandarin and obtained $3 million in grants for a multimedia center.

Engaging 21st-century students is the goal, however, the question remains:  To what end?  Our collective cultural mind seems divided on this point without knowing it.  If we want to engage students with the goal of cultivating the mind set, skills, and sensibilities associated with print, then we’d better think twice about a bait and switch approach.  The tools of engagement will undermine the goal of engagement.  However, if we want to instill skills and sensibilities that we might loosely label digital literacy (or, following Gregory Ulmer, electracy) then the tools and the goals will be in sync.

The hope of many, including myself on my more optimistic days, is that 21st century education at its best will be able to impart both skills sets — traditional and digital literacy.  On my more pessimistic days, I’m not so sure this is going to work.  In any case, the two are not the same and the tools for each tend to work against the ends of the other.  More on this later.

Several recent studies show that young people tend to use home computers for entertainment, not learning, and that this can hurt school performance, particularly in low-income families. Jacob L. Vigdor, an economics professor at Duke University who led some of the research, said that when adults were not supervising computer use, children “are left to their own devices, and the impetus isn’t to do homework but play around.”

Really?  I could have saved them the grant money.  He goes on to note that even when homework is being done it is usually accompanied by continuous text messaging and sporadic Internet use.  Whatever homework is done under those conditions is probably of little or no value.  Mind you, depending on the assignment, the homework might have been of little or no value anyway, but that is another matter.

At Woodside, as elsewhere, students’ use of technology is not uniform. Mr. Reilly, the principal, says their choices tend to reflect their personalities. Social butterflies tend to be heavy texters and Facebook users. Students who are less social might escape into games, while drifters or those prone to procrastination, like Vishal, might surf the Web or watch videos . . . .  “The technology amplifies whoever you are,” Mr. Reilly says.

Interesting and important point that isn’t noted frequently enough.  Every personality type is a complex mix of strengths and weaknesses.  What is being amplified by the technology? The examples given in the article are not exactly encouraging:

For some, the amplification is intense. Allison Miller, 14, sends and receives 27,000 texts in a month, her fingers clicking at a blistering pace as she carries on as many as seven text conversations at a time . . .

Some shyer students do not socialize through technology — they recede into it. Ramon Ochoa-Lopez, 14, an introvert, plays six hours of video games on weekdays and more on weekends . . . Escaping into games can also salve teenagers’ age-old desire for some control in their chaotic lives. “It’s a way for me to separate myself,” Ramon says. “If there’s an argument between my mom and one of my brothers, I’ll just go to my room and start playing video games and escape.”

I’m going to wrap up this first post on the article by suggesting that parents often miss the point on this issue, but students can be quite introspective about the really significant dynamic.

Insightful students who know what is really going on:

“Video games don’t make the hole; they fill it.”

“Facebook is amazing because it feels like you’re doing something and you’re not doing anything. It’s the absence of doing something, but you feel gratified anyway.”

5 thoughts on “Reflections on “Growing Up Digital””