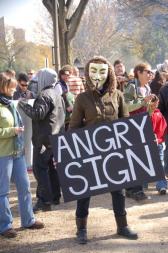 Reading about Jon Stewart’s recent D. C. rally, I noticed a picture of a participant wearing a “V for Vendetta” mask and carrying a sign.  It wasn’t the mask, but the words on the sign that caught my eye.  The sign read, “ANGRY SIGN.”

I wouldn’t have paid much attention to it had I not recently crossed paths with a guy wearing a T-shirt that read:  “Words on a T-shirt.”  Both of these then reminded me of the very entertaining, “Academy Award Winning Trailer” — a self-referential spoof of movie trailers embedded at the end of this post.  The “trailer” opens with a character saying, “A toast — establishing me as the wealthy, successful protagonist.”  And on it goes in that vein.  The comments section on the clip’s Youtube page likewise yielded a self-referential parody of typical

Youtube comments.  Example:  “Quoting what I think is the funniest part of the video and adding “LOL” at﻿ the end of the comment.”

There is a long tradition of self-reference in the art world, Magritte’s pipe is classic example, but now it seems the self-referentiality that was a mark of the avant-garde is an established feature of popular culture.  Call it vulgar self-referentiality if you like.  Our sophistication, in fact, seems to be measured by the degree of our reflexivity and self-awareness — “I know, that I know, that I know, etc.” — which elides with a mood of ironic detachment.   Earnestness in this environment becomes a vice.  We are in a sense “mediating” or re-presenting our own selves through this layer of reflexivity, and we’re pretty sure everyone else is too.

On the surface perhaps, there is a certain affinity with the Socratic injunction, “Know thyself.”  But this is meta-Socrates, “Knowingly know thyself.”  At issue for some is whether there is  a subject there to know that would localize and contain the knowing, or whether in the absence of a subject all there is to know is a process of knowing, knowing itself. 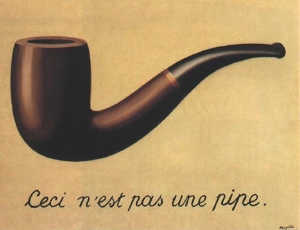 Leaning on Thomas de Zengotita’s Mediated: How the Media Shapes Your World and the Way You Live in It

and Hannah Arendt’s The Human Condition

, here’s a grossly oversimplified thumbnail genealogy of our heightened self-consciousness.  On the heels of the Copernican revolution, we lost confidence in the ability of our senses to apprehend the world truthfully (my eyes tell me the world is stationary and the sun moves, turns out my eyes lied),

but following Descartes we sought certainty in our inner subjective processes — “I think, therefore I am” and all that.  Philosophically then our attention turned to our own thinking — from the object out there, to the subject in here.

Sociologically, modernity has been marked by an erosion of cultural givens; very little attains a taken-for-granted status relative to the pre-modern and early modern world.  In contrast to the medieval peasant, consider how much of your life is not pre-determined by cultural necessity.  Modernity then is marked by the expansion of choice, and choice ultimately foregrounds the act of choosing which yields an attendant lack of certainty in the choice – I am always aware that I could have chosen otherwise.  In other words, identity grounded in the objective (reified) structures of traditional society is superseded by an identity which is the aggregate of the choices we make — choice stands in for fate, nature, providence, and all the rest.  Eventually an awareness of this process throws even the notion of the self into question; I could have chosen otherwise, thus I could be otherwise.  The self, as the story goes, is decentered.  And whether or not that is really the case, it certainly seems to be what we feel to be the case.

So the self-referentialism that marked the avant-garde and the theories of social constructivism that were controversial a generation ago are by now old news.  They are widely accepted by most people under 35 who didn’t pick it all up by visiting the art houses or reading Derrida and company, but by living with and through the material conditions of their society.

First the camera, then the sound recorder, the video recorder, and finally the digitization and consequent democratization of the means of production and distribution (cheap cameras/Youtube, etc.) created a society in which we all know that we know that we are enacting multiple roles and that no action yields a window to the self, if by self we mean some essential, unchanging core of identity.  Foucault’s surveillance society has produced a generation of method actors. In de Zengotita’s words,

Whatever the particulars, to the extent that you are mediated, your personality becomes an extensive and adaptable tool kit of postures . . . You become an elaborate apparatus of evolving shtick that you deploy improvisationally as circumstances warrant.  Because it is all so habitual, and because you are so busy, you can almost forget the underlying reflexivity.

There seems to be a tragically hip quality to this kind of hyper-reflexivity, but it is also like looking into a mirror image of a mirror — we get mired in an infinite regress of our own consciousness.  We risk self-referential paralysis, individually and culturally, and we experience a perpetual crisis of identity.  My sense is that a good deal of our cynicism and apathy is also tied into these dynamics.  Not sure where we go from here, but this seems to be where we are.

Or maybe this is all just me.