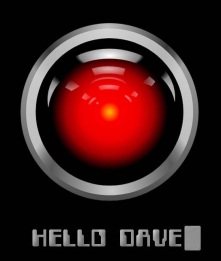 Via Alan Jacobs at Text Patterns, I read the following excerpt from Arikia Millikan’s short piece “I Am a Cyborg and I Want My Google Implant Already” on The Atlantic’s web site:

By the time I finished elementary school, writing letters to communicate across great distances was an archaic practice. When I graduated middle school, pirating music on Napster was the norm; to purchase was a fool’s errand. At the beginning of high school, it still may have been standard practice to manually look up the answer to a burning question (or simply be content without knowing the answer). Internet connection speeds and search algorithms improved steadily over the next four years such that when I graduated in the class of 2004, having to wait longer than a minute to retrieve an answer was an unbearable annoyance and only happened on road trips or nature walks. The summer before my freshman year of college was the year the Facebook was released to a select 15 universities, and almost every single relationship formed in the subsequent four years was prefaced by a flood of intimate personal information.

Now, I am always connected to the Web. The rare exceptions to the rule cause excruciating anxiety. I work online. I play online. I have sex online. I sleep with my smartphone at the foot of my bed and wake up every few hours to check my email in my sleep (something I like to call dreamailing).

But it’s not enough connectivity. I crave an existence where batteries never die, wireless connections never fail, and the time between asking a question and having the answer is approximately zero. If I could be jacked in at every waking hour of the day, I would, and I think a lot of my peers would do the same. So Hal, please hurry up with that Google implant. We’re getting antsy.

Well, hard to beat honesty I suppose.  I did find it slightly ironic that the Google executive who is interviewed for this piece was named Hal.

Jacobs aptly titled his post “The saddest thing I have read in some time,” and he added simply, “There’s a name for this condition: Stockholm Syndrome.”  Well put, of course. 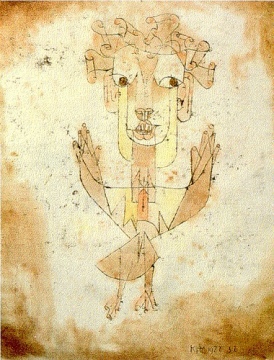 Perhaps it was reading that piece that prepared me to read Walter Benjamin’s IX Thesis on the Philosophy of History later on that day with a certain melancholy resonance:

A Klee painting named “Angelus Novus” shows an angel looking as though he is about to move away from something he is fixedly contemplating.  His eyes are staring, his mouth is open, his wings are spread.  This is how one pictures the angel of history.  His face is turned toward the past.  Where we perceive a chain of events, he sees one single catastrophe  which keeps piling wreckage upon wreckage and hurls it in front of his feet.  The angel would like to stay, awaken the dead, and make whole what has been smashed.  But a storm is blowing from Paradise; it has got caught in his wings with such violence that the angel can no longer close them.  This storm irresistibly propels him into the future to which his back is turned, while the pile of debris before him grows skyward.  The storm is what we call progress.

In any case, I tend to agree with Jacobs — it was rather sad.

5 thoughts on ““The storm is what we call progress””