In the first season finale of the AMC series Mad Men, Don Draper famously pitches an ad campaign for Kodak’s new slide projector in which he suggests, with appropriately melodramatic music in the background,

This is not a spaceship, it’s a time machine … It goes backwards and forwards, and it takes us to a place where we ache to go again … It’s not called ‘The Wheel.’ It’s called ‘The Carousel.’ It lets us travel around and around and back home again.

The scene was effectively parodied by SNL shortly thereafter.  You can see the scene below and watch the parody at Hulu. 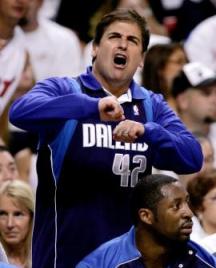 Over the top perhaps, but it did convey Madison Avenue’s awareness that selling a product involves connecting with something deeper than utility or effectiveness.  Think what you will of the Dallas Maverick’s sometimes controversial owner Mark Cuban, he has perceptively argued, along similar lines, that those in the professional sports business are not selling games, they are selling experiences.  In a recent blog post he writes,

Ultimately, his post ends up being about technologies that insert themselves into the experience and thus detract from that experience.

… I hate the trend of handheld video at games. I can’t think of a bigger mistake.  The last thing I want is someone looking down at their phone to see a replay.

This is not unlike Jaron Lanier’s wondering whether we are really there at all when we tweet, blog, or update our status throughout an event or gathering.  Cuban and Lanier, in their own ways, are both arguing for our full presence in our own experience.  He concludes his post with the following observation:

The fan experience is about looking up, not looking down. If you let them look down, they might as well stay at home, the screen is always going to be better there.

This is good advice for life in general.  Look up from the screen.  Who knows, in looking one another in the eyes again, we might begin to recover the habits of respect and civility that are now so sorely missed.

One thought on “It’s Not a Game, It’s an Experience — Mark Cuban Channels Don Draper”