Kurt Vonnegut’s “Harrison Bergeron” presented us with a striking illustration of the potentially debilitating consequences of the constant distraction.  In that story the distraction is brutally imposed; but, as we noted last week, we choose our distractions.  In fact, we embrace our Internet-empowered distractions.  We love to be distracted and we crave diversion.  We can hardly stand it if we are without distraction or diversion for more than a few moments at a time.  We complain incessantly about our busyness, but were it all to stop we would hardly know what to do with ourselves.  This raises some interesting questions.  Why are we so keen to envelope ourselves in constant distraction?  Why do some of us develop an addictive relationship to the constant flow of distraction?  Why are we so uneasy when the distractions stop?

Back in June, I reflected on the theme of distraction and diversion on the heels of a post about the religious aura that sometimes surrounds our love affair with sports.  We were then, you will remember, at the height of World Cup fever.  I want to revisit some of those same thoughts and tweak them just a little bit as a follow up to Friday’s post on distraction and “Harrison Bergeron.” 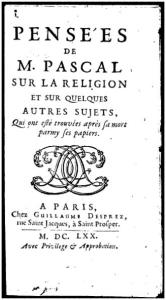 Distractedness and the need for diversion are not new phenomenon of course.  Although the condition may now be intensified and heightened, it has been with us at least since the 17th century, and almost certainly before then.  It was in the 17th century that Blaise Pascal began assembling a series of notes on scraps of paper in preparation for a book he never wrote.  When he died at the age of 39 he left behind hundreds of barely organized notes which were later collected and published under the French title Pensées

, or thoughts.  Pascal is today remembered, if at all, either for his law of fluid pressure or an argument for God’s existence known as Pascal’s Wager.  Neither quite does justice to the depth of his insight into what we used to call the human condition.

Pascal knew that we needed our diversions and distractions and that without them we would be miserable.  His description of the younger generation sounds wholly contemporary:

Anyone who does not see the vanity of the world is very vain himself.  So who does not see it, apart from young people whose lives are all noise, diversions, and thoughts for the future?  But take away their diversion and you will see them bored to extinction.  Then they feel their nullity without recognizing it, for nothing could be more wretched than to be intolerably depressed as soon as one is reduced to introspection with no means of diversion.

But Pascal is not merely an old crank berating a younger generation he fails to understand.  Pascal applies the same analysis indiscriminately.  Young or old, rich or poor, male or female — for Pascal it just comes with being human.  “If our condition were truly happy,” he explains, “we should not need to divert ourselves from thinking about it.”  As things stand, however,

What people want is not the easy peaceful life that allows us to think of our unhappy condition, nor the dangers of war, nor the burdens of office, but the agitation that takes our mind off it and diverts us.  That is why we prefer the hunt to the capture.

We need distractions and diversions to keep us from contemplating our true condition, frail and mortal as it is.  For this reason we cannot stand to be alone with our own thoughts and seek to fill every moment with distraction.  Pascal’s view is admittedly rather grim even as it resonates with our experience.  Yet, Pascal knew there was more than this to the human condition.  There was also love and passion, knowledge and creativity, wonder and courage.  Pascal knew this and he insisted that we recognize both the glory and the misery of humanity:

Let man now judge his own worth, let him love himself, for there is within him a nature capable of good; but that is no reason for him to love the vileness within himself.  Let him despise himself because this capacity remains unfilled; but that is no reason for him to despise this natural capacity.  Let him both hate and love himself; he has within him the capacity for knowing truth and being happy, but he possesses no truth which is either abiding or satisfactory.

Pascal insists that we reckon with all that is good and all that is bad in us.  It is our awareness of the possibility of goodness, however, which heightens our misery.  And, yet again, it is our awareness of our misery that is part of our glory.  In the end Pascal believed that “God alone is man’s true good” and Christ the “via veritas.”  With St. Augustine, whose influence permeates Pascal’s thought, he would have prayed, “Our hearts are restless until they find their rest in Thee.”  Perhaps this is why at times something akin to spirituality and the language of worship suffuses our most prominent and powerful diversions.

Augustine and Pascal in turn both helped shape the thought of  2oth century novelist Walker Percy.  Percy blended Pascalian insight with a touch of existentialism in his best known novel The Moviegoer (1960) in which the main character, Binx Bolling, finds himself on a search.  “What is the nature of the search? you ask.”

Near the middle of the novel throughout which Bolling has been amassing clues he thinks are somehow related to the search, he despairs:

… when I awake, I awake in the grip of everydayness.  Everydayness is the enemy.  No search is possible.  Perhaps there was a time when everydayness was not too strong and one could break its grip by brute strength.  Now nothing breaks it — but disaster.

However, through a rather tortured relationship with a very broken young woman named Kate whom he has come to love, Binx begins to see grace in the ordinary.  Near the very end of the novel, while he and Kate are sitting at a service station discussing marriage and the worries that still fill Kate’s mind, Binx notices a man coming out of a church.  It is Ash Wednesday.  Binx watches while the man sits in his car looking down at something on the seat beside him.  The man’s presence puzzles Binx:

It is impossible to say why he is here.  Is it part and parcel of the complex business of coming up in the world?  Or is it because he believes that God himself is present here at the corner of Elysian Fields and Bons Enfants?  Or is he here for both reasons:  through some dim dazzling trick of grace, coming for the one and receiving the other as God’s own importunate bonus?  It is impossible to say.

In June with sports on my mind, I wondered whether, as Pascal would have it, sports were a mere distraction which facilitated our unwillingness to acknowledge our true condition; or, taking a cue from Percy, whether it might be a rupture of the “everydayness,” the ordinariness of our lives that may awaken us to the possibility of the search.  My sense at the time was that both were on to something, each was a possibility.  Sports can be merely a distraction conducive to living in bad faith in denial of the truth of our situation.  But at times bursts of grace and beauty appeared suddenly and unexpectedly in the midst of our diversion to remind us that we ought to be searching for their source.  “Through some dim dazzling trick of grace, coming for the one” we receive “the other as God’s own importunate bonus.”

Thinking now about the distractions enabled by the Internet, social media, smart phones, and all the rest I wonder if something like the same analysis might also apply.  Do we embrace these distractions as a way of refusing silence and contemplation because we do not care to entertain the thoughts that may come?  Perhaps.  Surely more than this is going on.  Sometimes a moment of carefree distraction is just that.  Is it possible that coming for distraction we might find something more — a real connection with another human being, a new insight, real wisdom, genuine laughter?

I am not so much of a pessimist that I would discount such possibilities.  But I do fear that more often than not our distractions, as Pascal would put it, are diversions that keep us from considering our true condition. They are part of the “everydayness” of life that is the enemy of the search and might even hide from us the possibility of the search.   To give up on the search, to be unaware of it, is to be in despair. If it doesn’t feel like despair, is it because, as Kierkegaard put it in a line that opens The Moviegoer, “… the specific character of despair is precisely this:  it is unaware of being despair”?

Perhaps it is also because we are too distracted to notice.  We are the “diverted selves” Percy described in Lost in the Cosmos: The Last Self-Help Book

In a free and affluent society, self is free to divert itself endlessly from itself.  It works in order to enjoy the diversions that the fruit of one’s labor can purchase.  The pursuit of happiness becomes the pursuit of diversion …

4 thoughts on “The Search”