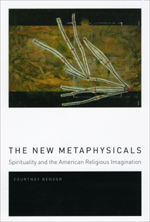 The Immanent Frame is hosting a discussion of Courtney Bender’s new book, The New Metaphysicals: Spirituality and the American Religious Imagination

.  The book examines the belief and practices of a set of individuals living in Cambridge, Massachusetts who would classify as “spiritual but not religious,” an increasingly popular self-designation in the Western religious landscape.  Today’s post, “Working on individualism” by Joel Robbins, highlights perhaps the key theme of Bender’s book:

… the lack of sociological awareness these metaphysicals display does not mean that their beliefs and practices do not have histories, are not housed within institutions, and are not profoundly shaped by cultural patterns of thought and action that present-day practitioners did not in fact make up. Bender teaches us how to identify the hard social skeleton that makes possible even the very amorphous-seeming spirituality that the metaphysicals promote. She shows how their religious endeavors depend on various religious, medical, and arts organizations to give them space; on more or less established cultural models of phenomena such as past lives and subtle bodies to teach them what is possible by way of spiritual encounters; and on the shared narrative structures they use to make sense of their experiences to themselves and to one another. By rendering visible the social machinery of metaphysical spiritual lives, Bender makes those she studies finally social scientifically tractable. In doing so, she also manages to trouble the distinction between religion and spirituality that currently shapes so much of popular and sociological discourse alike. If the spiritual is just as socially embedded as the religious, she points out, the usual distinction that makes religion a matter of institutions and the spiritual one of personal experience turns out to need rethinking.

In other words, their dismissal of tradition is itself a tradition, and antipathy to history and institutions has a history and has yielded institutions.  Herein lies the significance of Cambridge as the site for her ethnographic analysis.  Fringe and individualistic spiritualities have long flourished in Cambridge.  However, Robbins goes on to make an important qualification that he finds implicit in Benders work:

… the seeking after individualism that the metaphysicals Bender writes about display in their pursuit of self-development also raises a final point: many Americans want to live as individuals, and they want their religion to help them pull this off. Social scientists tend to imagine that Americans don’t really want this. They suspect that bowling alone and Sheilaism are bad things that happen to otherwise good (read: “social”) people. But the spiritual practitioners that populate this book don’t help us make that argument. Instead, they remind us that many times, those who live very individualistic lives are getting just what they want and what they work toward. We might wish this were not so, or even seek for ways to change it, but it is important to recognize how well the goals of these practitioners line up with the religious formations through which they have tried to pursue them. For me, that is one of the most arresting conclusions of Bender’s important social scientific reckoning with a kind of faith that our disciplines so often fail to comprehend.

His post also contains some revealing reflections on the values and assumptions that guide sociological research.

2 thoughts on ““Spiritual but not religious””