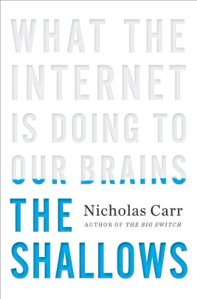 “Is Google Making Us Stupid?” was my first introduction to Nicholas Carr.  It was a good first impression.  That essay published in The Atlantic during the summer of 2008 has led to a new book by Carr, The Shallows: What the Internet Is Doing to Our Brains

.  Barely off the presses, it has already been making the rounds through media outlets and blogs.

Carr was interviewed on NPR and at ABC News.  The former is helpful and the latter is perhaps an unintended demonstration of Carr’s thesis by the interviewer who is trying too hard to be clever, but comes off only as rather shallow.

Adam Thierer’s review at The Technological Liberation Front also includes various links related to Carr and The Shallows including the official website for the book.

In Thierer’s helpful schema, Carr leans toward “pragmatic pessimism” in regards to the impact of the Internet on society.  Whether one is likewise inclined or not, it appears from all accounts that Carr has given us a lot to think about.  So on the summer reading list it goes.

UPDATE:  Another thoughtful review, this one by Russel Arben Fox, can be found at In Medias Res.