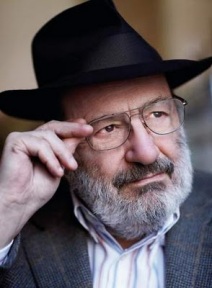 It may not look like much, but that grocery list sitting on the kitchen counter is a faint visual echo of the beginnings of civilization.  At least from a certain angle of vision explicated and illustrated in Umberto Eco’s The Infinity of Lists: An Illustrated Essay

The list is the origin of culture. It’s part of the history of art and literature. What does culture want? To make infinity comprehensible. It also wants to create order — not always, but often. And how, as a human being, does one face infinity? How does one attempt to grasp the incomprehensible? Through lists, through catalogs, through collections in museums and through encyclopedias and dictionaries.

There is a point at which scholars, philosophers, intellectuals (public or otherwise), critics, etc. — one is temped to list on — reach either a certain age or a certain stature, which it is sometimes hard to tell, when they are able to make simple, direct, and yet curiously ambiguous claims and assertions which, had they been made by a lesser figure, would certainly be dismissed out of hand, but coming from the sage achieve a certain matter-of-fact status and attain the aura of profundity.  So, a list of such from Eco:

In fact, read in context, these make a good deal of sense, or at least one sees how they may make sense.  Then one also attains a certain permission to be blunt:

If you interact with things in your life, everything is constantly changing.  And if nothing changes, you’re an idiot.

In passing Eco also manages to make some interesting claims about the Internet:

SPIEGEL: But you also said that lists can establish order. So, do both order and anarchy apply? That would make the Internet, and the lists that the search engine Google creates, prefect for you.

Eco: Yes, in the case of Google, both things do converge. Google makes a list, but the minute I look at my Google-generated list, it has already changed. These lists can be dangerous — not for old people like me, who have acquired their knowledge in another way, but for young people, for whom Google is a tragedy. Schools ought to teach the high art of how to be discriminating.

I appreciated Eco’s distinction between modes of knowledge acquisition, which can make all the difference.  Sometimes those who were trained on the older model and subsequently enter the digital world fail to appreciate how their cognitive position and sensibility are different from those who are, as they say, born digital.

One last observation from Eco,

My interests change constantly, and so does my library. By the way, if you constantly change your interests, your library will constantly be saying something different about you.

This along with Eco’s ruminations about lists as a means of holding off the specter of death and creating order from chaos echoed (pun hesitantly intended, although technically, foreshadowed) Nathan Schneider’s excellent “In Defense of The Memory Theater” from some months ago.  I’ve recommended before, and I’ll do so again as my own thinking and interests, along with the books around me, take a turn toward memory.  From Schneider:

Ever since the habit of writing first took hold of me as a teenager, I knew precisely why I did it, and why I did it so compulsively: to hedge against the terror of having a terrible memory. Though still young enough to expect no sympathy, I constantly feel the burden of this handicap. Confirmation of it, and that writing is its cure, I discover every time I pick up something I wrote years, or even months ago. Reading those things puts me in an uncanny state, like a past-life regression. Meanwhile, unrecorded impressions, sayings, old friends, and good books vanish without warning or trace. Some read and write to win eternal life; I would be happy enough just to keep a hold of this one.